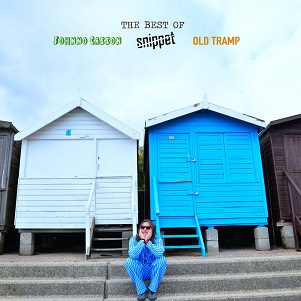 
Time is a strange resource infinite in nature and yet, for most of us, our interaction with it is finite and in the grand scheme of things fleeting. It's a valuable resource, one that we should use wisely, but end up flittering away. There's a slogan that says life is too short for bad wine, whilst the same rings true of music. So here's a quick recommendation as to how you should invest some of the former to listen to the latter.

Like wine, music comes in a number of varieties, so more tied to regulation than others, heck they don't all use grapes and those nuances are what makes the world go around, be it from a bottle or poured liberally from a jug.

Snippet aka Johnno Casson aka Old Tramp is a wonderful music host who has reached the point in his career where he's deserving of a best of and if you're quick enough, that album, "The Best Of Johhno Casson", comes complete with a bonus free album, "After The Party", with both albums featuring tracks from all three instances of the artist.

First and foremost, Casson, is an artist that proclaims himself from the music community, rather than the music industry, something that his current status as Fatea Innovation artist of the year for his Warm & Toasty Club/Memory afternoon project easily attests.

The album is released under the Snippet moniker and that's arguably his best known musical identity the one where he fuses his song writing skills with a dose of electronica, yet carries the title "The Best Of Johnno Casson", which may or may not be true, depending on your song preferences.

What is true is that there is a lot of revelation in the chosen tracks. I mentioned music community earlier in this review and that is the fundamental driver that sits below the music. Songs about peoples place in family and society and family and society's place in people. It's a song album, one that tells us that we are not alone. This is an album to have a conversation with and then to go out and get the albums on which it draws to further the debate.

Johnno Casson, is very much real, Snippet is a character, together they put a lot of wisdom into their their songs, a best of indeed.