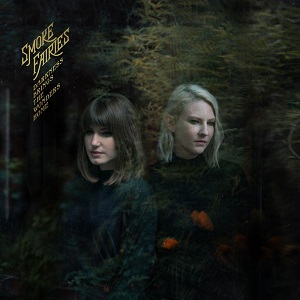 
Their name taken from the local term for the wisps that form from the evening mist on Suffolk country roads, it's been a long four years since Jessica Davies and Katherine Blamire blessed the world with their brand of heady otherworldly, spidery goblin folk, a sound first captured by Curved Air on 'Back Street Luv' and subsequently only ever evoked by 90s female duo Pooka and, more recently, Kristen Hersch's solo work.

While previous albums all, to some extent or other, had a hard, almost industrial element to the music, it positively floods this, a dark sonic storm and occasional welter that complements the mystical and mysterious gothic imagery or a world glimpsed in the hours of darkness when the imagination is at its most feverish.

You're immersed in the maelstrom from the start with 'On The Wing', abrasive guitars etching jagged repetitive riff as Katherine singing lead, their voices meld and soar asking ask "Did you wake with feathered skin? Did you let the hunger in? Did you try to lift yourself out of sight?" setting a theme of escape, capitulation to desire and motion that runs throughout.

'Elevator' is even heavier in its clanging, bass riffs, forceful drums (played throughout by David Brozowski) and squally guitar solo capturing the sense of insomniac disorientation ("I can't sleep in Hollywood nights") captured in the image of being "stuck between floors/Caught in automatic doors".

It ends abruptly to be supplanted by the heady darkling folk of the angular but melodic urgency of 'Disconnect' that, Jessica stepping up front, again speaks of tensions in "I'm always fighting/With what I believe and what is true" and a lyric about an emotionally disassociated lover "Lost in your own world…looking for no one".

Much here unfolds in some between worlds dreamscape, the slower, more narcotic five-minute 'Coffee Shop Blues' no exception ("I dreamed of New Orleans/For the first time in years/Didn't recognise myself/Some dreams I go walking/And I'm a ghost/Frenzied and out of control"), again drawing on notions of drifting and "The weight of time shifting" in what, at times, feels like Alice in Wonderland caught up in Pan's Labyrinth.

"I lost my guts when the wheels came off" sings a deep voiced Davies at the start of the slowly prowling 'Left To Roll', another number about a relationship in a flux of impermanence ("Can you say you'll stick with me until the seas have dried? Not if you can't cure my wandering mind"), grounded in the physical ("I reached for skin/My body did the talking") but switching with the changes in the weather.

Then it's Katherine's turn to vocally command 'Out Of The Woods', another steamrollering riff track that surely owes a nod or two to Led Zep in its fusion of folk and hard rock, the duo's voices joining in soaring witchy unison on the chorus while the lyrics are mired in tangled roots, cold and rotting leaves, spineless things and the black dog of depression ("When you went away/I was waiting for the earth to break/To pull you down/Through hollow ground/But you're clawing back again.. you cut your path straight through me").

The intensity continues with the strobing opening riff of 'Chocolate Rabbit', the sort of thing they'd play on a loop to break detainees in Guantanamo, a song bristling with gothic sexual menace ("You leave me unsatisfied/With sugar around my mouth") that serves as a warning to would be lovers ("Why come chasing after me/When life could be sweet?" ) in its feral predatory imagery ("I spun around like a dog/Trying to find the best position/To snap you up in my jaw") and the allure of beauty and youth that proves to be "a white sheet that's covering a dark hole".

From here fantasy and reality collide in 'Chew Your Bones', the song from whence the album title comes, inspired by both Sarah Perry's novel The Essex Serpent and a local urban myth about The Croydon Cat Killer, which turned out to be foxes that the duo transmute into a desperate living intoxicating but terrifying nightmare ("It's got my scent, it's tracking me down") that's part Guillermo del Toro and part the pagan rural spookiness of The Dancing Did.

The disconnect between reality and the virtual world is also at the core of 'Don't You Want To Spiral Out Of Control?' as, entranced by the glow of the TV or the mobile phone, "we're just drifting", that image of transience returning with "It's only temporary/This room we sleep in/It's not for memorising" as we seek to escape the boundaries "Just beyond the wordless meaning" and the numbing loneliness and surrender to desire because "if you've got a hole to fill/You've got to take the pill".

Conjuring thoughts of Ready Player One or The Matrix ("I fell into a viral dream/And I'm never coming back again"), they end with the pulsing clamour of 'Super Tremolo', a musing on breaking the chains of the mind that keep us anchored to the mundane, Katherine singing of "these habits of the mind/Always on repeat and overdrive" and of silencing all the noise "that distracts and deludes", with the striking metaphor of being a "black fly dying in florescent tubes", of moving beyond human confines and becoming digital noise, a "signal fizzing in electric flow", the ultimate fusion with the technology we worship. If you go down to the woods today, you're sure of big surprise.