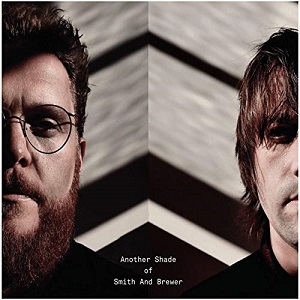 
Having come together during a Joan Armatrading tour on which they both supported, Another Shade of Smith and Brewer is the first studio album from the duo. Recorded over the course of just one week in a makeshift studio in a friend's barn, they sought to record their best songs with great musicians playing together in a great sounding room. The album also features old friends Eric Lavansch on drums, and Tom Sinnett on bass.

If you've listened to their live album, some of these songs will seem very familiar. Most of this album did feature on that release, so if you already have Smith & Brewer Live, this will not be an essential album for you. That is not to see that these are just reheated versions with more production; there's a little more to it than that. Not enough perhaps to make owning both albums a necessity, but there's a definite evolution on display.

The highlights of the live album are all present and correct. Isabella kicks off the album with the perfect example of how well Smith and Brewer's voices meld together. Life's Too Short gets a pacier arrangement with a toe-tapper of a tune that is a lot of fun. Better Then Your Father is a wonderfully self-deprecatory track which really sticks out in the collection, as does Better Man which similarly touches on that kind of naval-gazing doubt.

Of the previously unreleased tracks, Love You Forever is probably the pick. It's a beautiful song with Lavansch's drums really driving it along. Favourite Photograph has a nice country feel to it, and Music City combines rock, country and blues for a humorous tale of a trip to Nashville.

If you've not come across Smith and Brewer before, this is the perfect introduction to a duo who really appear to be going places. With more of a band feel to this album, their songs sound a little more expansive, which is a logical direction in which to move. This evolution loses none of what makes the duo tick though, with their lyrical skills and harmonies still coming to the fore. All in all Another Shade of Smith and Brewer does exactly what it says on the tin.

A Lovely Day For Doing Nothing