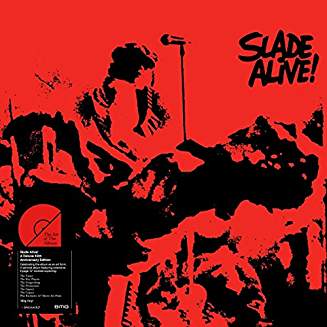 
One of British rock's classic live albums, Slade Alive! helped define an era before its creators were swept along on a tidal wave of glitter and pomp and phonetic spelling, It's propelled with rough-hewn guitars, stomping beats and Noddy's vocal scream that owes everything to John Lennon's unrestrained treatment of the Isleys' Twist & Shout. It was also the first Slade album to make the US as well as the UK charts and as such caught the ears and captured the imaginations of the young Joey Ramone, the nascent Kiss and, of course, one Noel Gallagher, going on to become the biggest selling LP since Sgt Pepper. That's some landmark.

The record came out on the back of a cover of Little Richard's version of Get Down and Get With It, providing Slade with their breakthrough hit - the first of 16 consecutive UK top 20 45s. It's a perfect pointer towards what happened next and was already a staple of their live set by the time manager/producer Chas Chandler booked them into Command Studios in Piccadilly for three nights in October 1971 to record Slade Alive!

Perhaps improbably for the time the record came out without overdubs, capturing Slade live and unadulterated with the band overseeing the muscular, unfussy mix themselves - a level of artistic involvement not afforded to a pop band since The Beatles.

But there's more finesse here than some might remember with all four members putting in a storming shift. The raucous cover of Ten Years After's Hear Me Calling that opens proceedings gives way to the original In Like A Shot From My Gun, which is not a great song but delivered with more than enough brio to satisfy the heat of the moment. The Lovin' Spoonful's Darling Be Home Soon - complete with Noddy's burp - nods to the band's freakbeat roots as the 'N Betweens. The band's own Know Who You Are and Keep On Rocking are usually overlooked in favour of the bigger hit singles that were to follow, but they serve the cause well, as does the blistering cover of Born to Be Wild that closes the show.

It all comes wrapped in a deluxe hardback cover with a 28-page booklet that reproduces the inner gatefold cartoon artwork of the original and adds an excellent essay by Chris Ingham that places the whole thing in context.

And to think in the age of streaming and single track downloads, a live album as risky as this would never get made.