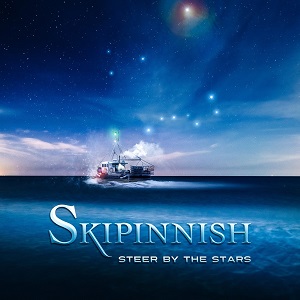 
'Anchors Of Our Soul' and 'Steer By The Stars are anthemic and thought provoking from their titles to the lyrics and the massed choir joining on the chorus of the album opener. This is an album of stirring big production folk rock, tracks like 'Farewell' and 'Wishing Well' marry muscular rock rythmns, big guitar, atmospheric pipes and fiddle to create powerful music. Skipinnish, with a deep rooted association with fishing, write sea related lyrics that manage to have a resonance beyond that and a much wider significance.

Instrumentals like 'The Lads Of Mull' have the same sheen but also have a fire and energy driven by bagpipes and fiddle. 'Coire Bhreacan' Gaelic meaning 'cauldron of the speckled seas' tells in rousing form the tale of the Gulf of Corryvreckan, a whirlpool between the Isles of Jura and Scarba. In Scottish mythology it is the hag goddess of winter's washtub, Norse King Breacan was swept into the turmoil and rescued by his dog. More recently George Orwell nearly drowned there. 'Last Of The Hunters' is a more poignant piano, historic and political, led reflection on the fisherman's battle with the sun. Again the song uses a stirring mass vocal on the chorus, that you know will be a lump in the throat moment live.

'Lands Below The Ocean' is peppered with evocative geographic references like touchstones. The rousing song moves between energetic dance music and reflective moments. Pure energy, driven by huge sounding bagpipes is the set of tunes 'The Atholl Set. Skipinnish are absolute masters at mixing together traditional and rock sensibilities to make powerful music crackling with energy and drive. Reflective and still stirring, is the tune 'The Youngest Ancient Mariner', building from beautiful fiddle to more muscular almost Prog guitar and pipes power. Skipinnish's fine vocalist Norrie MacIver, one time Gaelic singer of the year is excellent throughout, but really shines on the Gael 'Puirt Set', dancing round the lyric and complex tune. Skipinnish were formed in 1999 by Angus MacPhail and Andrew Stevenson, so 2019 is twenty years a fact celebrated in the swirling closer '20th Anniversary Jigs' a final infectious reminder of the oomph and power of the band.

Last Of The Hunters