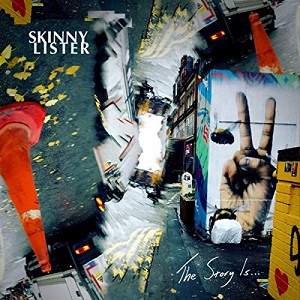 
Still one of the hardest working bands on the circuit, the Skinnies fourth album sees them drifting slowly from their riotous shanty punk roots that was so prevalent on 'Forge & Flagon' and 'Down On Deptford Broadway'. There was a hint on 'The Devil, The Heart, The Fight' that they were refining their sound and the new album confirms their evolution.

Of course, there are elements of the Skinny Lister roots that we know and love. The battle cry rally of 'Rattle And Roar' is cut very much from the same cloth as 'Beat It From The Chest' and 'Raise A Wreck' - look forward to that becoming a loud party of the live show. The uptempo 'Cause For Chorus' draws on some exaggerated Braggisms in the delivery and joins '38 Minutes' and the vital "this is not a drill" cry in providing the vibrancy of the collection. The story of the 'Artist Arsonist' who lives below (not to be confused with the similarly alliterative 'Alister McAllister')and 'Stop & Breathe's gentle roll and message taking the time to, erm, stop and breathe amidst the madness also play to the Skinny strengths and link with their musical past.

However, 'The Story Is' comes more inspired by their surroundings and personal vignettes of their adventures dressed in a series of different musical coats. The final declaration of 'Any Resemblance To Actual Persons, Living Or Dead, Is Purely Conicidental' proves both a sturdy end piece and tongue in cheek confession to what's come before. The shift though, is apparent from the start with the unusual sound of a ska/dub beat in 'Second Amendment' while 'The Shining' could easily find itself attached to some mirror balled disco soundtrack, even injecting some Saturday Night Fever strings and a hint of Blondie's 'Atomic'. 'Sometime So It Goes' and 'Diesel Vehicle' both slow things down albeit with different inspirations, the former relying on an air drifting fiddle, the latter bemoaning the "I put unleaded in my diesel vehicle" blunder.

The star moment may well come in the form of the title track that despite the reference to and hint of a power ballad from the 1980's, like 'Carry' from the last album, has a unstoppable melody and sentiment that's impossible to resist and highlights some of the variety of instrumentation and sounds that prove Skinny Lister aren't just as one trick ponies. In any case, there's no doubt, as ever, that the gigs will continue to be a blast. Rum tasting at the ready.