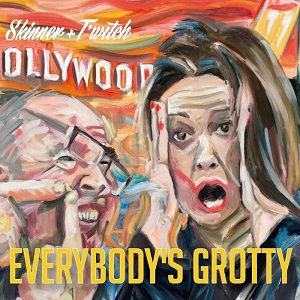 
There is most certainly a place for music of every genre to take a serious stance on social, political and world issues, but it's also good to sometimes just lighten up and be playful. Not that doesn't mean you can't still slip in a dig or two. Leeds duo Steve Skinner and Sandra Twitchett have put together a collection of satirical songs variously designed to prick pomposity or simply raise a smile.

The title track gets the ball rolling with a jaunty music hall-styled reminder that behind all that celebrity gloss these are still people who get pimples and smelly feet. As the old adage goes, even the Queen goes to the toilet. 'Breakway In A Takeway' is a honky tonk swayalong about a burger diner waitress pining for her long absent trucker lover that cheekily steals lines from the Everly's 'Ebony Eyes'. Rather inevitably 'The Ageing Special Agent' opens with a touch of Bond, proceeding in a brass splashed tango direction for a song about 007 on a pension and having to be in bed for ten while, both trading verses and singing against each other, 'You're Always Right' strikes a familiar relationships chord. Again nodding to music hall traditions, a similar anti-romantic note's struck on the cheapskate tokens of affection of 'It's Our Valentine' and, combining flamenco and calypso 'Back To The Bills' takes a tour of European holiday spots, living it up on pasta or paella but reminding that you always have to eventually go back to the mundanity of everyday life.

Financesequally inform the fingerpicked 'Money, Money, Money', the duo turning to politics and how corporate criminals and their dodgy deals rarely result in a spell at Her Majesty's Pleasure, giving way, in turn, to 'The Election' and its cynical observations that all the candidates are ultimately the same with their double talk and broken promises as bankers continue to shaft society and the NHS falls further apart.

Sung by Steve, 'Too Many Feet' is a brass embellished tongue in cheek take on immigration as seen from a |UKIP Brexit perspective, the lyrics a moan about all those bloody Anglo Saxons, Normans, Romans and Danes flooding the country, building castles and buggering up the country for the Druids.

'Offshore', as you might suspect, returns to shadowy corporate practices of tax dodging with a musical nod to Cabaret, the album ending with two versions of 'My Friend Fred', a Berlin-cabaret like carousel keyboards number about an undertaker, cake baker and nurse with poor personal hygiene, sung first by Sandra and then Steve. Disagreeably enjoyable.