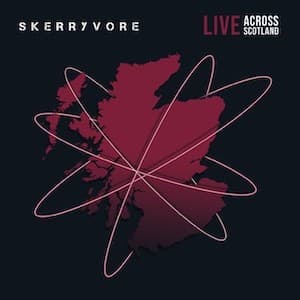 
Taking their name from the lighthouse off the cost of Tiree in the Inner Hebrides, the eight-piece trad rock outfit celebrate their 15th anniversary with this self-explanatory album recorded at such prestigious venues as Aberdeen's Tvoli Theatre and Glasgow's Royal Concert Hall as well as in smaller surroundings like the town hall in Darvel, Ayshir.

Starting out at the Stramash in Edinburgh they kick off with a cover of Gordon Duncan's instrumental 'Trip To Modera' from their most recent studio album,Evo, setting the rousing crowd frenzy tone that continues throughout as the pipes and fiddle drive things along. From here, it's over to the Isle of Skye to pose the somewhat redundant question 'Can You Hear Us?' From Chasing The Sun underpinned by Fraser West's drums and then to Killin for 'Happy To Be Home', the anthemic mid-tempo track they recorded with Sharon Shann for the Decade album, here recent recruit Scott Wood's whistle replacing her button accordion.

Surprisingly, there's nothing from their 2005 debut, but they do go back as far as 2007's On The Road for traditional tunes medley 'The Ginger Grouse Jigs' recorded in Inverness and, if you can't actually hear the sound of massed feet stomping around on the dance floor, you can certainly imagine it. They return to Evo in Forfar for the more sedate piano ballad swayer 'At The End of the Line', the audience mixed out to focus on the thoughts of home lyrics. There's a further five numbers from the same album, these being the ballad 'Hold On' (from Glasgow), a lengthy instrumental that fuses the pipes and keyboards lament Soraidh Slan and the electric guitar dominated thrust of 'The Rise' at Fort William, the organ-backed, poppier folk-rock Selkirk audience chorus singalong spotlight 'Waiting On The Sun' recorded and, the final number from the end of tour, Christmas run-up Dunoon show, hands aloft 'Take My Hand'.

Pitching back to 2014, World of Chances provides two numbers, first up being the lolloping 'The Showman' from Darvel, complete with introduction to pipers Martin Gillespie and Wood who carry the instrumental along (and which also featured as a live version on that album), and then another crowd rouser with 'Put Your Hands Up'. It's the second of four numbers recorded at the Ironworks in Inverness, the others being Gillespie's rousing pip showcase 'The Rut' and, stretching out for ten minutes, opening with electric guitar solo by writer Alex Dalgleish, live favourite 'Live Forever'.

The album ends with the Aberdeen show closer, 'Path To Home', again extending over ten minutes and providing the obligatory showcase spot for each of the band members. With their planned live shows cancelled following the pandemic, this is solid compensation and, in addition, the booklet, rather than the usual practice of describing the tracks, gives details of the different venues where they were recorded.