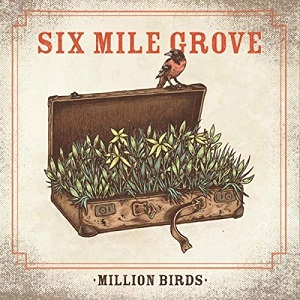 
Six Mile Grove are one of those lovely 'labour of love' type acts that have been ploughing their own furrow through the Americana music scene for the past 20 years. All of the 5 piece Minnesota band work, have partners, children and regular lives to contend with whilst somehow finding space to squeeze in touring and recording, with 'Million Birds' being their seventh album release to date.

Their influences range from Bob Dylan's storytelling to the Jayhawk's harmonies and another reviewer recommends them for fans of Jason Isbell, Tom Petty and early Wilco, so the signs are good!

The band consists of Brandon Sampson, vocals & guitar, Brian Sampson, drums, Barry Nelson, backing vocals, electric guitar & keys, Dezi Wallace, bass and John Wheeler, steel guitar. The songs are all originals with Brandon being credited as lyricist so I am assuming the band collectively supply the music, and lastly, the album was recorded, mixed and mastered by Tom Herbers of Third Ear Recording.

Keyboard drones, lazy electric guitar and shuffling drums usher in album opener and title track 'Million Birds' with Brandon Sampson's sweetly husky voice right on top of the mix before the showcase harmonies enter. It's unusual to start an album with a deceptively laid back song such as this, but it cleverly hooks the listener in and put me in mind of Chris Smither's version of 'Killing The Blues'.

'Patrol Cars' is more driven, full of reverbed guitar, thumping drums and bumping bass, all dressed with keyboards and steel guitar while 'Shame On Us' is a sparse, almost modern country ballad that would be at home on a Luke Combs album, and then there's the choppy guitar crunch of the quietly defiant 'Wage A War'.

Track five, 'Early Morning Rain' is a beautifully bittersweet acoustic led tale of love, loss and longing, but any post song reflection is dispelled by the sharp guitar stabs of the defiant 'Not My Fault' which conjures up images of Richard Thompson's 'Wall Of Death' Two really strong songs these and great to see them in the middle of an album where often things can lag a bit. However, for me the next four songs are the real heart of the record.

'Shot In The Arm' boasts a riff so mighty it could have been lifted from Led Zeppelins back catalogue, 'The Radio' is indeed very radio friendly, 'Money Doesn't Matter' is great fun and the nearest they get to good old Bar Room country music, then 'Damned If I Do' is all fingerpicked and steel guitar loveliness, with its rhythmic pulse supporting the yearning vocal.

Final track 'Goodbye To The Loneliness' is no slouch either, another crunchy, riff led number that chug's through in fine fashion and, in a final reference point, hints at prime era Joe Walsh.

This is an album that rewards with repeated listens as the exemplary playing, songwriting and production reveal themselves, aided by the band being as seamlessly tight and inventive as would be expected with folks that have been playing together for twenty years. Worth a mention in their own right, the vocal harmonies are beautiful throughout whether they are ghosting the vocal line, supporting it or embellishing the choruses.

All in all, in 'Million Birds' Six Mile Grove have produced an album of quiet, understated magnificence and it just goes to show, making great music doesn't necessarily mean giving up the day job.