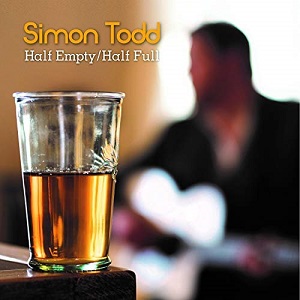 
Co-produced by Boo Hewardine and Chris Pepper (who, between them, also provide guitars, bass, percussion, melodion and ukulele), this is the Northumberland singer-songwriter's second album. There's been a nine year gap, but clearly the songs have been gestating nicely.

As such it opens with the worksong rhythms of murder/revenge folk blues 'Down To The River', revealing a gruff, lived in-voice, though, as the following country-shaded bittersweet 'Send Her Home To Me' shows, he can be tender too on a song about asking for his lover's new man to send her back when he's done with her.

Were I be pushed to make comparisons, then it would probably be fellow northerner Clive Gregson, especially on 'The Last Step' while the choppy 'Judas Kiss' wouldn't sound out of place on an Any Trouble album. Equally, the sweeping swell and cascading melody of 'And I Get Weak' and, moving from a chug to a fulsome majestic climax, 'The Rough Spots', about overcoming life's adversities, recalls both the anthemic pop melancholic romanticism of Richard Hawley and Elvis Costello.

The softly sung, mortality-themed 'Think Of Me' is all mid-tempo reflective heartache about loss and those left behind and, featuring Rachael Bailey on accordion, 'Demons' a simple acoustic strummed, emotionally moving number about the adult scars of childhood and teenage abuse and bullying and "the broken train wreck I've become", while, in decided musical and lyrical contrast, album closer 'Before The Devil Knows You're Dead' is heavy, riff-driven blues rock about power and corruption.

On a timely note, the album also includes the spare strum of Poppy Fields, Bailey on violin, written to commemorate the 100th anniversary of the end of the Great War and, more specifically, as part of an operation conducted in Flanders by General Haig, to recall the slaughters of Passchendaele and the Somme (at which 60,000 fell on the first day), "virgin boys left screaming in the dark" while Haig got a knighthood.

Whether the glass is half full or half empty, it satisfies to the last drop.

Send Her Home To Me