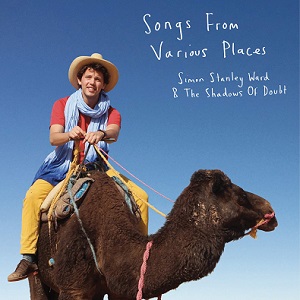 
Juggling careers as a performer on London's Folk and Roots scene and doing stand up in the city's comedy clubs, Ward kind of brings the two together for his second album, a kaleidoscope of musical styles rather than the Americana focus of his debut with regular forays into the surreal.

As such, it opens with the surging country punk of 'Jurassic Park' with its catchy chorus of "I wish I was Jeff Goldblum in Jurassic Park", which I guess is as good a career ambition as any for a ten-year-old. Backed by guitarist and producer Paul Lush from Danny and The Champions of the World, drummer Neil Marsh and bassist Geoff Easeman, he stays on the country range, but pulls up a stool in the honky tonk for 'I Heard It All' if you could imagine George Jones singing about getting dumped by unintended voicemail.

If you'll excuse the inevitable fishy pun, it's followed by the somewhat disposable cod-funk of 'Set In Stone' before returning to the old school country jauntiness of 'A Friend (Who Isn't Me)' with pedal steel courtesy of Henry Senior and then proceeding with another scientific instructional ditty in the Jonathan Richmanesque 'Water (You've Got To Have It)' which, featuring a fine guitar solo from Lush, offers such observations as how it makes up sixty-five percent of the human body, feeds the trees, makes up the rivers, washes us clean and, importantly, keeps tuna moist in the can.

Introduced by and featuring twanging guitar solo, the warbled, cascading chords break-up number 'Goodbye' is another with those funny familiar country feelings of vintage Don Gibson and a particular album highlight. Another country icon, Marty Robbins, vaguely comes to mind with 'Stand Up', a number that has nothing to do with comedy (even if it has amusing lyrics), but rather concerns a couple needing to cross the now swollen river (avoiding snappy things) to return home and make a stand.

It ends with another - but more engaging - five-minute track, 'Wine', an extended metaphor about his love being a good 2009 Rioja with undertones of oak, of taking a bath, listening to the test match on 5 Live and resolving to not pull the plug on the relationship. It's probably not something you'd play on a regular basis after initially sampling its quirky, clever and fun charms, but it is one you'll likely keep on hand to dip into again when you just need something to cheer you up and make the day a little brighter.