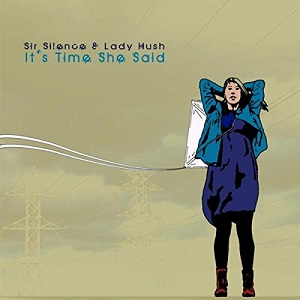 
Sir Silence & Lady Hush is the collaborative musical partnership of Carmarthenshire-based “socially engaged artist and professional creative practitioner” and guitarist/songwriter Bill Taylor-Beales and his wife Rachel, a talented singer-songwriter and multi-instrumentalist in her own right. This is their third album under that moniker. Its immediate predecessor Scratch The Sky appeared in 2008, since which time they’ve avidly collected together some more of Bill’s “dystopian maladies” for pair-wise performance. These pieces span 35 years and pay homage to a broad span of musical influences that have accompanied the couple throughout their varied creative adventures. Bill terms them “many memories caught within the strings of my old Epiphone guitar that I bought over 35 years ago”. Found within the fretboard, there’ve been lost songs and lyrical fragments penned all over the globe. As ever, and thematically speaking, Bill’s songs are described by Rachel as “musing about time and some of the different human responses to the mystery of what it means to exist within time. The songs themselves have been waiting many years for their day… and now their time has come.”

Rachel contributes the gorgeous backing vocals as well as her strong multi-instrumental skills (piano, organ, harmonica, soprano sax, celesta and midi-accordion), in support of Bill’s characterful vocal lead and inventive instrumental work (acoustic, electric, slide and bass guitars, beats and loops). I salute Bill and Rachel for their engaging and imaginative scoring which brings the songs alive in such a distinctive way while making timely capital out of the lyrics’ special quality of haunted melancholy. For each of the songs has an individual aura, inhabiting a different soundscape and couched in an imaginative, often playful arrangement that takes full cognisance of the story being told within. Temporal musical references from the course of the past 35 years lead us from the gentler side of John Cale (Seaside Town) and Lou Reed (How Many Times and Lay Down) to David Bowie (Old Blind Jack), while there’s a hazy, drugged (almost hallucinatory) sense of consciousness pervading Running Home and Heaven. The theme of mortality recurs across the album, but arguably comes across strongest on Living On Concrete, which was inspired by phrases from conversations Bill had with residents of a hospice. Writing this song and recalling the power of visual art within the hospice setting paved the way for his artistic side project Picture Me, and, fittingly, all proceeds from this album will contribute to funding that initiative which will enable Bill to offer portraits of children within the hospice to family members free of charge. In which context, the album’s final item, Sometime Later, with its spoken word narrative and angelic sung peroration, feels even more apocalyptic before its mantra fades into the heavenly ether.

Or, as the sleeve slogan has it, “Now is as late as it’s ever gonna get”. Think about it…