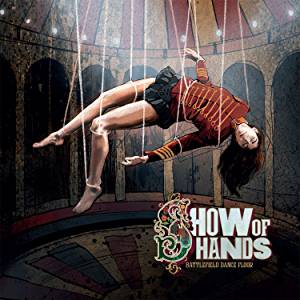 
Steve Knightley and Phil Beer have over their 20+-years together as Show Of Hands become unquestionably one of the biggest names on the British folk scene, determinedly ploughing their own furrow and carving a unique niche for themselves from their west-country base. Every one of their album releases (over 20 at the last count!) has moved their story on, invariably sporting a fresh angle all the while proudly remaining true to their roots. I’m sure you don’t need me to tell you that Steve’s one of this country’s most highly-regarded singer-songwriters and Phil’s multi-instrumental prowess is legendary, but their inspiration and influence extends way beyond those blindingly obvious qualities, and notwithstanding their clear close musical bond the scope of their various collaborations with other musicians is also vast, proving a distinct feather in the cap in the CV of any collaborator. Over many years, singer and double bass player Miranda Sykes has been a long-term collaborator with Steve and Phil, and she returned to the fold last year following a sabbatical. To that trio lineup has recently been added percussionist Cormac Byrne, an absolutely ace musician whose punchy presence adds so much to the already highly invigorating Show Of Hands mix. The four-piece on tour is a mighty beast indeed, fairly conquering all-comers (get yourselves out there for their next UK tour, 22 dates beginning late-October).

So here’s a brave, and undoubtedly successful, attempt to capture (albeit with a well-judged measure of deft creative embellishment from Matt Clifford’s keyboards and a caring, never-overloaded studio production courtesy of Mark Tucker) the special flavour and dynamic of this latest Show Of Hands lineup, on a set of songs that includes several new Steve Knightley compositions that have already been thoroughly road-tested in live performance. Songs that are signature Knightley in that although they make an immediate mark with catchy melodies and memorable phrases there’s invariably an undercurrent and parallel commentary beneath the immediate narrative, so the songs work on many levels and prove satisfying on repeated hearing as successive plays reveal even more. The album opener Lost, though ostensibly built around a gently busy rhythmic motif, contains countless subtleties of texture that delight and complement the poetic rumination of the lyric. On the surface the song is a maritime piece inspired by the story of doomed Devon sailor Donald Crowhurst, but this invokes resonances of the deeper theme of masculine despair and dwindling hope. The entrancing musical backdrop (a becalmed wave-tossed seascape, perhaps?) involves the rippling patterns of mandocello and Cormac’s bodhrán underscored by layered vocals and soft programming. The theme of failed love is continued through the plainly-expressed folk-rock ballad Just Enough To Lose, its emotional impact underscored by Phil’s poignant fiddle line. Regret is balanced by sanguine defiance, hope and reassurance on the impeccably-phrased You’ll Get By, an optimistic, user-friendly “anthem for doomed old-agers”, while in a similar vein of steadfastness Swift And Bold’s military tattoo introduces a stirring shanty-style tribute to 6 Rifles Infantry Regiment and their watchword “if the heart is steady then the line will hold”. The familiar scenario of a soldier’s lover’s ambivalent reaction to him being away at the war is the theme of My True Love, an endearingly old-school folk-romantic song by Adrian Mannering, endearingly voiced by Phil here, while another slant on military morals and behaviour is accorded by the CD’s title track, a slightly irreverent yet savvy portrayal of eve-of-battle drunkenness to which even the great figures of history are not immune! The exuberantly exploratory air of much of this album takes in the gleefully jaunty bhangra-meets-morris styling of the latter as well as the soaring, uplifting vocal chanting of guest Shahid Khan on the displacement-through-Brexit-themed Mother Tongue (a co-write with Johnny Kalsi) and some sparky “Cornish reggae” on Dreckley, a somewhat tongue-in-cheek tale of regional prejudice that also brings in the concept of a doomed love affair. A quality of wry yet justly pointed cynicism also characterises Make The Right Noises, an observation on insincerity, on which Miranda supplies a sublime vocal lead.

The album’s covers dovetail nicely in among Steve’s originals. Steve and Miranda duet on Forfarshire, Kirsty Merryn’s haunting portrait of the heroic Grace Darling (which he sang on Kirstyn’s own album She And I a couple of years back); this track also features the multi-instrumental virtuosity of Gerry Diver. Phil finally gets the chance to bring into the Show Of Hands recorded repertoire Richard Shindell’s road-movie truckin’ classic Next Best Western, which has been already been a live favourite for some time (in a way, this harks back to Phil’s proto-Americana Arizona Smoke Revue days). Phil’s brilliantly animated fiddle playing graces Steve’s latest take on Leonard Cohen’s First We Take Manhattan (revisited from the duo’s early Backlog 1987-1991 album).

This new Show Of Hands album is a musically diverse set, sure, but also a strongly cohesive and tightly commercial one which also manages to keep the focus on the songwriting – an achievement which the core duo, their collaborators and production team appear to wear lightly. But despite such apparent effortlessness the sheer substance of the writing and musicianship is never undersold. On seventh or eighth playthrough, Battlefield Dance Floor is already up there with Steve and Phil’s best, and a persuasive showing for their new-look performing unit, which looks to have plenty of mileage yet.