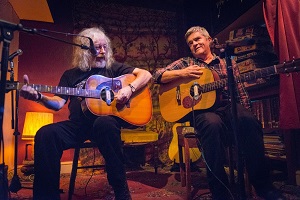 That is certainly the case with this collection of songs, some of which were recorded in 1975 on a Revox quarter-inch tape machine (for the young'uns - it was hi-tech back then).

The tape was lost but, lo and behold, it was found many years later in a Hackney attic and here it is again - this time in a crystal clear digital format.

The remainder of this brief but quite excellent set was recorded in 1992. Dave Thomas and Hugh Gregory got together as a guitar and vocal blues duo in 1974 and launched themselves on the UK folk club circuit.

Their tight arrangements got them a residency at the legendary Half Moon in Putney. They were soon signed up and lots more UK-wide gigs followed culminating in appearances at the Cambridge Folk Festival.

So this album is a best described as Brownie Terry and Sonny McGhee meets JJ Cale. Indeed, there are two JJ Cale songs - Magnolia and Same Old Blues - and two Terry McGhee songs - Sitting On Top Of The World and Love's A Disease - to be found here.

The playing is crisp, with Steve Jinks filling out the sound with percussion and bass on several tracks.

The opening Hey Porter by Johnny Cash, has been covered by many including Ry Cooder, and here it is tight and punchy. The second track is JB Lenoir's I Sing 'Em The Way I Feel. John Mayall's jaunty Sitting In the Rain is followed by JJ Cale's Magnolia, the slowest track to found here.

O'Reilly At The Bar by Dan Hicks swings along really nicely with some lovely guitar breaks, the traditional Honeybabe is beautifully arranged, and Sitting On Top Of The World pays homage to the original version by The Mississippi Sheiks. Love's A Disease closes the album with more fine guitar pushing the song along

At only 26 minutes, this is not a long album, but trust me it's sounds so good you'll play it all over again like I did!

The boys are planning an extensive tour this year and on this evidence I'd certainly seek them out.