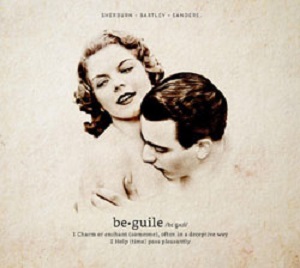 
The world moves on, and bands come and go. But happily, some return to be-guile us over again. Once upon a time, around 20 years ago and far away, no folk festival bill was ever complete for me without an appearance by those irrepressible lads Chris Sherburn and Denny Bartley. Then along came uilleann pipes maestro Nick Scott, and together they formed the trio Last Night’s Fun, who for a mere five years or so in the early years of this century provided the most irresistible combination of fun and musicianship ever: last night, tonight and every bally night. Chris’s wonderfully surreal flights of banterous fancy kept us royally entertained during the inevitable (otherwise for some mildly interminable) bouts of tricky tuning and re-tuning, and the consequent often seriously lengthy musical items, whether in the form of full-on and full-in immersive tune-sets or beautifully sean-nós meandersome, seemingly improvised song arrangements, could be relied upon to keep us quite literally spellbound; and a whole hour could pass by before you were consciously out of the land of the fairies.

But all good things have to come to an end – though in this case, the split of Last Night’s Fun was principally due to the vast geographical distances and logistical difficulties involved in keeping the act together at all, at all. So I’d given up hope of Last Night’s Fun ever reuniting, and I’d been grateful for a few (if frustratingly sporadic) Chris-&-Denny duo performances over the past few years – and of course, their superb 2009 duo album Lucy Wan. But you can’t keep a good idea down (and, as the cynic will observe, fairytales always get recycled!). But my radar must be slipping, for it took me a while to get to hear about this inspirational new conjoining of talents – Chris and Denny in musical cohorts with the ultra-charismatic, ultra-talented fiddle player and singer Emily Sanders (who was currently, I thought, at something of a loose end perhaps after the dissolution of the fab trio Isambarde in 2011 and a resplendent, if brief spell on Pete Morton’s wonderful Magical Christmas Tree). Yea, what a winning – and yes, literally be-guiling – combination! (For which, it turns out, we must thank Terry Oliver, who, Be-guile’s liner note proclaims, mooted the idea of this lineup recording a CD after a reportedly stupendous, ostensibly one-off concert at Whitby Folk Week in 2016.)

And so it proves with this CD incarnation of the SBS Trio, which (I learn) has been touring (again sporadically) for the past couple of summers. Be-guile is described as a studio-recorded “live” album (that famous oxymoron!) delivering a goodly selection of the most requested songs from the Trio’s repertoire. Two of these (Next Market Day and The Tinkerman’s Daughter) have survived from the LNF days, and sound great in their new garb, freshly reinterpreted. The remainder of the songs form a really good introduction for Emily, who proves to weave musically ideally around Chris and Denny’s unmistakable sound”. Her contributions, on both fiddle and viola and a good share of the lead vocals, are both distinctive and well-matched to the duo dynamic (and indeed the dynamic duo!). And the tensile strengths of the old Chris’n’Denny/LNF unit are still present in abundance. But of course, with the difference that this new Trio is altogether more song-centred than LNF ever was – there are no purely instrumental tracks or purpose-built tune-sets, although the occasional tune will still arise out of a song at its conclusion – for instance The Autumn Child succeeding William Taylor and The Holly Bush (at first cautiously) ushering out The Tinkerman’s Daughter – while the final item on the CD interweaves Bulgarian Red throughout Bantry Girls’ Lament, which is then rounded off with Bothy Band classic The Fisherman’s Lilt as backdrop for Emily’s recitation of an extract from the song’s lyric.

As far as song repertoire goes, the Trio ranges eclectically from the aforementioned Irish traditional through trad-styled Dylan (the underrated Seven Curses, Denny taking his cue from Pete Morton’s dark reimagining) to an urgently animated take on Cyril Tawney’s narrative Sammy’s Bar, by way of a sparky new-direction take on New Railroad. The real stop-in-the-tracks moment, though, to my mind, is the maddeningly enigmatic Jimmy McCarthy song Bright Blue Rose, performed in memory of Chris’s late father Goff and sung by Denny with an intensity of emotional passion that almost chokes his delivery.

There is indeed the essential frisson of live performance about this CD, for all that its studio origin is betrayed by the double-tracking of Emily’s harmony vocal lines on one or two songs. There are also selective guest appearances by Andy Seward (double bass on three tracks), Martin Simpson (slide guitar on two) and engineer/mixer Chris Miley (snare drum at the close of the set finale); and the whole exercise has been mastered by Phil Beer.

Dictionary definitions of the CD’s title are emblazoned on the disc’s surface, and the second of these – “to help (time) pass more pleasantly” – potentially rather undersells the deeper and more literally “be-guile-ing” impact of the music within. It’s a charmer alright!