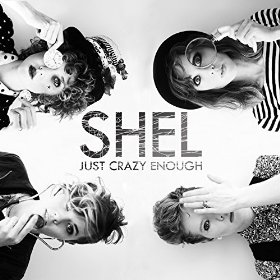 
Four kooky sisters, one crooked vision - to make the music they want, the way they want. That mentor/producer Dave Stewart is on their side can only help of course as the rootsy folk-pop of their debut is draped in a poppier cloak of many colours for this solid second outing.

In lesser hands this would sound so contrived as to be utterly pointless, but the Holbrook girls have stamped this music with a distinct personality and bags of skill as acoustic instruments knit together with outbreaks of beatboxing in a surprisingly cohesive 'pop pourri' of influences - there's even a defiantly anti-rock cover of Metallica's Enter Sandman midway through the archly-denoted Side B.

Current single Rooftop is crying out for a coat peg to hang itself on - with skippy rhythms, harmonic regularities and airy lyrics all that separates it from world dominating ubiquity is its timely inclusion in a hit teen flick, perhaps. No less insistent, You Could Be My Baby is an uncompromising bid for the mainstream, although those sweet vocal harmonies remain intact, so the pop machine isn't going to get things all its own way. The same is just as true of the almost painfully unwavering Love Me Do with its adamant mandolin skank, breathy vocals and restrained electronics it sounds like a festival hit in waiting.

Away from the dead hand churn of the pop machine, the digital reality of the modern commercial landscape has created a space for the unexpected, the individual and the particular - it seems SHEL have much to thank it for.