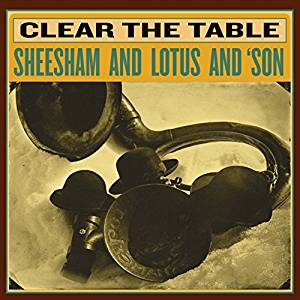 
Rogue apostrophe aside, this Canadian trio are (is) what they call themselves – Sheesham Crow (real name Teilhard Frost), Lotus Wight (Sam Allison) and Son Sanderson. They’ve been around the scene since somewhere near the start of this decade – but spiritually their home is back in the late-20s/early-30s (their 2012 album was even titled 1929), situated at an imaginary crossroads where ragtime, jugband, Depression-era blues and old-time get to meet up, have a real good time and then go their separate ways. The presentation of their albums is appropriately accompanied by sepia-toned band photos, and their devotion to retro is so complete that they even made their last album (titled 78 rpm!) using authentic 1938 record-cutting equipment. But it’s back to “modern-fangled” sound and stereo separation for all but the final track on Clear The Table (the suitably shouty finale, Ida Red, has been cut using the aforementioned 78 rpm technology) – albeit with no loss of ambience and keeping all the tremendously energy-fuelled vibe of the trio’s music-making.

The guys are all expert instrumentalists, and Clear The Table retains their unique instrumental complement – fiddle, harmonica, kazoo, banjo, jaw harp and sousaphone, with some whistling and stomping foot-percussion. Oh, and something called “contrabass harmonet” (is this the same as the weird “contrabass harmoniphoneum” contraption that appeared on previous albums? – hey, we should be told!). The repertoire, compared to those previous records, is “more of the same” – in other words, a further gleeful dip into the obscurities of the era. Taking in the high-octane hoedown of Dance All Night (that could’ve come from the likes of Gid Tanner’s Skillet Lickers) and an Uncle Dave Macon fiddle medley, a classic slow-drag Jelly Roll Morton number (Michigan Water), a slice of rousing Carter-style country-gospel (I Truly Understand), a jaunty Frank Converse tune (Rumsey’s Jig – which by the way ain’t!), and the breakneck Ozark Rag (culled from the East Texas Serenaders). Also, this time, at least a couple of the tunes will be familiar to old-time enthusiasts (the opener, Darling Cora, and Lazy John which Sara Grey has popularised); even so, S&L&S sure play ’em as to the manner born (and beyond!). Finally, there’s a pair of tracks involving a credit to Teilhard Frost (All Dressed Waltz and Down In Your Pockets) which are band originals, though the latter is also part-credited to Big Bill Broonzy.

S&L&S have more than enough energy, inventiveness and repertoire to take ’em on further down this long road and thru plenty more albums, so let’s clear that ol’ table again and get on top cos there’s no room on the floor!