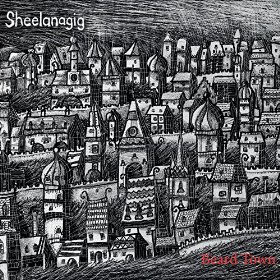 
Sheelanagig are one of those bands that have long been a favourite in the Chamberlain household, we have always enjoyed their energetic live performances and this Bristol based quintet's previous releases are regulars on the CD player, when the chance came up to review the band's latest release, it was too good a chance to miss.

Sheelanagig have now been together for around a decade and, in that time, have established a reputation for playing high octane Gypsy Jazz and Eastern European Folk inspired music. Beard Town is the band's fifth release and not only was it recorded at Peter Gabriel's RealWorld studios it also sees the quintet spreading their wings and heading off in some quite unexpected directions

Beard Town is made up of 9 tracks, three songs and six instrumentals. The songs stick to familiar Sheelanagig territory and are all written with the band's usual wit and intelligence. Beard Town is a humorous take on Hipster culture and the rise of social media. Schadenfreude, as the title suggests, looks at our unfortunate propensity for taking delight in the misfortune of others. While Objectophilia, on the other hand, is a darkly comic tale of obsessive love for a bridge.

Good though the songs are, it is the instrumental tracks that really stand out on Beard Town. In some ways this is a pity, as the length of some of the tracks means that they are less likely to be picked up for airplay and there are some real gems on this CD. Chat D' Orange is a classic Gypsy Jazz inspired piece that channels the twin spirits of Django Reinhardt and Stephane Grapelli and Hassid sees the band drawing on more middle eastern influences. For me, the standout track on Beard Town is one that, if you played it to them blind, most fans probably wouldn't recognise as a Sheelanagig track. Inspired by the band's recent trip to The Shetlands, Shetlag is a piece that has been well marinaded in the Nordic Folk style and comes in two distinct movements, the first conjures the peace & solitude of these remote islands and the second captures the sounds and feel of a long summer evening as the sun goes down and the party gets going. The final track on Beard Town, La Bernerie, also draws on Nordic Folk influences to create a relaxing counterpoint to the the album opener and title track.

With Beard Town, Sheelanagig have managed to pull off a neat trick in creating an album that is both familiar and new and unexpected, combining as it does the band's Gypsy Jazz influenced stock in trade with new, more Northern European influences. This album is another step on Sheelanagig's long journey, one that will hopefully bring them a new set of fans, and sees them growing as songwriters and performers. Like a fine wine, Sheelanagig get better with age and, on the evidence of Beard Town, album No6 is going to be pretty special