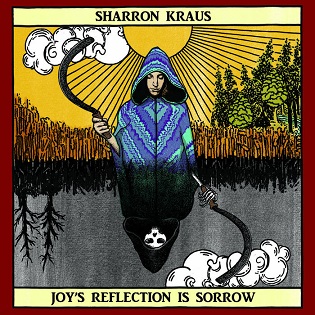 
Sharron's latest release is a collection of eight original songs that offer sincere and insightful answers to today's most difficult of questions - what can we do when darkness falls and evil calls? - ever more relevant in this age of world-wide turmoil and intense personal loss. For all that her music is informed by folk tradition (both English and Appalachian), her songs don't actually sound a lot like traditional folk; they possess the innately limpid beauty of the wyrder end of the acid-folk spectrum, sometimes bordering on ambient but without that sub-genre's latent tendency towards anonymity.

The musical settings, where Sharron sensitively deploys a handful of extra musicians - Guy Whittaker (drums), Neal Heppleston (bass), Nick Jonah Davis (slide guitar), Oliver Parfitt (synths, organs) and Jennifer Bliss Bennett (recorder, viola da gamba, baroque fiddle, flute), and Nancy Wallace on backing vocals - thus bring into even sharper focus Sharron's clear-sighted lyrics and ethereal, clear-toned delivery. That is, although on initial acquaintance the first couple of tracks may seem to lull the listener into a false sense of aural security with their warm-textured synth colourings - for all that, the slightly ominous disc opener My Danger exhibits a shape-shifting, drifting demeanour as, with strikingly economical imagery, the raptor is being entreated to capture its prey.

A similar effect is created with the deceptively smooth rhythms of Figs And Flowers (Oh Sweet Dawn) and the blurry, fuzzy, spaced-out cocoon in which is cradled Secrets, that is until its soundscape opens out with a more earthbound violin motif; even so, here Sharron's lyrics prove more elusive. The animated drive of When Darkness Falls conveys the urgency of the lyric, entreating us to find a solution by acts of gentle defiance. On The Man Who Says Goodbye, the texture is pierced by intimate and telling, sharply focussed instrumental colours like slide guitar, and the title song is a bittersweet slice of delicate psych-folk waltzery that explores the seasonal dichotomy mirrored in its emotional state, which seems almost to inhabit the realm between this life and the imagined afterlife.

There's something both unsettling and comforting about Sharron's latest opus, and the qualities coexist in music that's both stimulating and reassuring. In the end, the prevailing current of this fine album is that of optimism in the face of despair - which can only be a good thing.