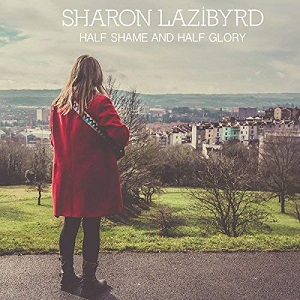 
Sharon Lazibyrd is the stage name of Somerset-based singer-songwriter Sharon Martin, whose last appearance on record was in a duo of that name (Lazibyrd) with Tom Chapman, on a 2013 release entitled Under The Sky which I admit passed me by completely. My loss I'd imagine, for since then her music has since received hearty endorsement from Tom Robinson, and there've been several plays (of advance tracks from this, her debut album) on BBC Introducing (she was the mixtape's Artist Of The Week back in January of this year); these have included the catchy yet ultimately elusive single Opium Of The Masses. So now it's time to reveal this debut album in its full (emphatically not half!) glory.

The album's title comes from a quote by Sir John Gielgud ("Acting is half shame and half glory. The shame of exhibiting yourself, the glory of forgetting yourself…"), which, tellingly, in Sharon's personal take, can be seen to refer both to life's journey and the ambiguities of musical performance. So the come-on challenge to the listener in the title song is "can you read me like a book?" - and a similarly knowing use of double-meaning permeates all of Sharon's lyrics. At the same time, the quite gloriously melodic nature of her songs artfully conceals their depth of thought. Half Shame And Half Glory opens with the charming, quirky tick-tock tale of clockmaker Mr. Smilie; backed by ukulele, violin and café-accordion, it sounds innocuous, and yet it's not without a slightly ominous undercurrent that's hard to pin down. The same is true of Winding Road, whose truth and intimacy is underpinned by a helpless vulnerability. More direct in its impact is More For Less, its apt political commentary summarised in a brilliantly tongue-twisting scattergun chorus mantra and capped by the sprightly tune Good Friday. Breezy too is the Caribbean reggae lilt of Don't Worry, and the Latin insouciance of closing track And They Danced (which doesn't quite work for me, if I'm honest).

Sharon plays ukulele, violin and viola, and the richness of the small-ensemble backing is completed by the presence of Damon Bridge (piano, accordion, percussion), Kate Bridge (violin), Tom Cory (drums and bass) and (in isolated appearances) Damian Clarke (hammered dulcimer), Stan Martin (piano), Lukas Drinkwater (double bass) and Maaike Siegerist or Leandro Maia (guitar). Sometimes, maybe, the lushly crafted soundscape of the songs kindof recalls Kate Bush, and on occasion the combination of memorable melodies with the deceptively warm bite of the lyrics conjures Kirsty MacColl. And on the enigmatic, longing and questioning What Time Is Later?, Sharon's voice reminded me of Nancy Kerr; this song leads naturally into the minor-key cautious reassurance of Blood And Bone (enriched by Damian's dramatic hammered dulcimer embellishment).

The constantly shifting ambivalence of Sharon's viewpoint is at times something of a puzzle, yet it's both balanced and complemented by the musical settings, and throughout all this Sharon compellingly maintains her own special identity.

Opium Of The Masses