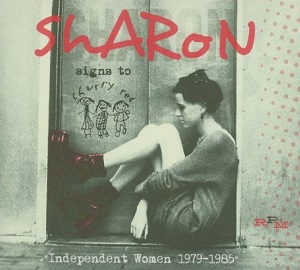 
This genre-transcending compilation is a glorious ragbag, a veritable compendium of wonderful, archetypal independent releases, many sourced from obscure labels and/or scuzzy cassettes, performed (sometimes in resolutely lo-fi) by what can be viewed retrospectively as a defining group of disparate female voices from the early-80s, ranging from pop artists with an eye on the charts to complete DIY advocates. It takes its title from a rather classy, cunningly plaintive faux-naïf 1985 single-artefact by "East Zone" duo The Kamikaze (Sex) Pilots that both formed a gently mocking ode to "everyone who has ever sent a demo tape to a record company" and itself exhibited a gawky creative nous that kinda married verité with a kooky neo-Joe Meek sensibility. This track and its Ranting-Ramones-style would-be-sequel-cum-followup Sharon's Been Deflowered And Defoliated fittingly form this set's bookends (just to guarantee the latter's refrain becoming a lasting earworm of course!).

The tracks proudly assembled here form a wildly eclectic, fun soundtrack to the early-80s, a parade of unashamed post-punk vitality covering 60s-inspired pop, revival, mod, independent, garage, rockabilly/cowpunk, soul/funk, reggae/dub (and all defiantly pre-C86). Almost all of the 45 tracks are new to CD-compilation; several are cunningly sourced from long-deleted regional vinyl comps, while the set also includes a small quotient of unreleased demos of the sort which would indeed have "found their way via jiffy bags to the in-tray of Cherry Red Records' A&R department" - unearthed gems like Heartbeat, a punchy 1984 offering from Edinburgh's Twinsets, for instance.

An often bewildering variety of musical expression is the spice (girl) of musical life here, with Liverpool's Margox delivering her pogo-pounding screamer Jimmy's Grin; Freeez vocalist Ingrid is backed by the Blockheads (no less) on catchy, cheeky opus The Jam Jar Song; Mari Wilson's raunchy 1980 B-side If That's What You Want could well pass for a lost Motown classic; The Candees' Little Miss Rainbow is a breezy slice of west-coast sunshine-pop Bangle-jangle; and Brighton's April & The Fools bring in some treble-saturated Honeycombed guitar-pop (You Do). Then there's power-pop combo The Flatbackers contributing Buzzz Going Round (tho' their energy-packed debut Pumping Iron would've been an even better contender IMHO); The Gymslips' Big Sister marries rippling Del Shannon piano riffs with Debbie Harry pizzazz; and The Shillelagh Sisters' stock-in-trade is strutting-out rockabilly swing (featuring vocalist Jacquie O'Sullivan, who later replaced Siobhan Fahey in Bananarama).

And that's only disc one! The cheesy fun continues on disc two, which (teenage) kicks off with an unforgettable cover of the iconic Undertones classic by Liz Kershaw, working with a bunch of studio musicians that includes original Undertones guitarists, and here going under the unforgettable (if somewhat ornithologically-challenged) pseudonym of Dawn Chorus & The Blue Tits. And also scattered liberally amongst the true non-obscurity-seeking personalities on this set we find other familiar names like The Marine Girls, Strawberry Switchblade (in the shape of a 1982 demo) and Dolly Mixture; while others were concealed within ostensibly unpromisingly-named bands, for instance, Canterbury's Red Roll-On included Barbara Gaskin in their lineup, and a pre-Pogues Cait O'Riordan sang with Pride Of The Cross.

Other gems cradled within disc two include Vivien Goldman's curious, jittery Flying Lizards/PIL-inspired jam Launderette (with Robert Wyatt at the drumkit), the wiry, nerve-jangling coupling of Normal by The Petticoats and I Hate Being In Love by Amy & The Angels (both involving Stef Heinrich); the piercing Woolworths-organ-soaked Money from The Mockingbirds (described as "a marriage of Noddy meets the B52s in Brighton"!); a distinctively febrile Mo-dettes B-side; and the full-on clashing-guitar skank-dub of Janet Armstrong's Exploitation, all contrasting with one-record-wonder Dee Walker's sassily retro, Locomotion-inspired soundalike Jump Back and self-styled mod icon Eleanor Rigby's notorious I Want To Sleep With You (the single that came with a free condom, apparently!). A frenzied barely-two-minutes of priceless manic garage mayhem in the shape of The Delmonas' Woa' Now contrasts with the sensuous flutes and percussion of Jane & Barton's I Want To Be With You (which actually came out on Cherry Red) and the tough IOU by Jane Kennaway & Strange Behaviour - such choice cuts really don't deserve to languish in vinyl obscurity. OK, so wildly diverse is the music on this compilation that inevitably some acts promise more than they deliver and thus (equally inevitably) not every cut will to be everyone's fancy (I could do without the disposable suntan-lotion bossanova of A Craze's Wearing Your Jumper or the ultra-glossy 80s chic of Tracie's over-Style-Council-conscious The Boy Hairdresser, but on the other hand they both take us straight to the zeitgeist).

And finally, but importantly, Sharon Signs To Cherry Red scores high in the presentation stakes, for, in trusty Cherry Red house style, the sturdy digipack contains a magnificent 24-page booklet packed with info and photos and an abundance of what-became-of-X-style fax that'll prove of interest not just to the trivia heads. Sharon is Fab!