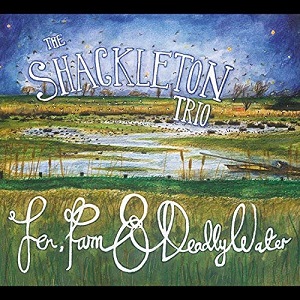 
It's exactly two years to the very month since I reviewed this outfit's debut full-lengther The Dog Who Would Not be Washed, and during that time the trio's become even hotter property on club and festival circuits - having just now chalked up a key appearance at this year's prestigious Cambridge Folk Festival too. They've changed their name from The Georgia Shackleton Trio, but the lineup remains at Georgia Shackleton (fiddle, vocals), Nic Zuppardi (mandolin) and Aaren Bennett (guitar, harmony vocals). I could also swear they've brought a guest bass player in on one or two tracks (tho' the package is curiously devoid of personnel credits). And what's important, they're still having great fun making music. Which in their case is a particularly sparky blend of folk, bluegrass and Americana stylings with occasional Scandinavian influence.

The new album's title is a giveaway to its connecting thread. All but one of the album's six songs have some kind of connection with the trio's native East Anglia, whether with its specific traditions (the old-timey gait of Radish Boys, based on the street cries of young radish sellers - it's "radishing"!), its local tales (The Fashionable Farmer, based on a broadside ballad once printed in Norwich), or local facilities (Down Into The Sea, a nostalgic yet cautionary look at the demise of the traditional seaside town). Two songs voice a concern for the future of the local landscape: the deliciously (unexpectedly) sprightly Fenland Song (a real earworm this, written by local farmer Fred Rooke) thoughtfully considers the impact of the Deadly Water of the album's title (the encroachment of the sea), while Powte's Complaint (a setting of a poem dating from circa 1611 found in Roy Palmer's Ballad History Of England) reflects the bitter mood of the fen dwellers as their land was being drained by the Dutch. The odd-song-out is Old Blue, an American minstrel-show song that I last remember hearing on a latter-day Byrds album (but here sporting a fresh, completely different tune). On all of these songs, Georgia's assured, charismatic singing positively shines forth, with the invigorating instrumental backdrops proving a brilliant foil for both her vocal work and her lively fiddle playing. Her sense of timing can be puckish too - check out Powte's Complaint (which has something of the slightly playful air of Boys Of Bedlam perhaps), where Georgia's delivery is set against a brooding pizzicato.

The album's four instrumental tracks bring the customary mix of vital bluegrassy chops (best heard on Georgia's composition The Stanford), spirited Transatlantic Session-style celtic (Bolton Lodge, written by Nic to depict the gait of his great-aunt and curiously reminiscent of Off To California) and stylish Scandi-folk (the track 9 medley that includes a tune intriguingly named The Penknife Killer!); the fourth, Only Viveka, is a trio arrangement of a quirky little tune by Karen Tweed.

Fen, Farm And Deadly Water is far more than the sum of its parts and also far more than a collection of purely regional interest; it's an impressive set, brim full of vocal and instrumental excellence, all pulled together with exemplary teamwork to produce a strikingly coherent album of truly distinctive character.