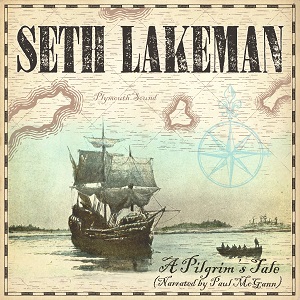 
2020 marks the 400th anniversary of the departure from Plymouth of The Mayflower, which carried a hundred "pilgrims" - British and Dutch passengers - across to America, hoping to make new lives there. In the event, only just over half of them survived the voyage and harsh winter to eventually form what became known as The Plymouth Colony. This new concept album is being released to tie in with a series of concerts where Seth is visiting locations significant to the tale of The Mayflower. Its inspiration came from a visit paid by Seth to the Plymouth Plantation in Massachusetts while on tour with Robert Plant, when he met with and talked to members of the Wampanoag tribe that still resides in that area; the trip made so great an impression on Seth that he created and recorded the 12 linked songs forming A Pilgrim's Tale in a very short time.

Seth has created, from extensive research into a variety of sources both contemporaneous and latter-day, a (fictional but entirely believable) narrative that chronicles the lives and progress of the Mayflower passengers on and following their epic journey, from the voyage itself to the early days of their settlement in America. Each of the songs takes a different personal perspective, either recounting a specific episode of the tale or providing a closely-observed character sketch. And each song is prefaced by a short passage of narration (written by Nick Stimson and spoken by Paul McGann) which sets the scene for its designated episode admirably plainly and without theatrical overkill, letting the ensuing song speak for itself and make all due impact.

As for the songs themselves, all but one (Daniel B. Goddard's Bury Nights) are Seth's own compositions, steeped in the folk idiom and sounding thoroughly authentic in the company of the three traditional-based numbers; the remaining track (Westward Bound) is a setting by Seth of a poem by John Masefield. Highlights for me were the powerful opening premonition Watch Out (sung by Cara in the persona of a Wampanoag girl), the account of the unfortunate incidents that befell the Saints And Strangers during that first cruel winter, and the dramatic consequences and narrow avoidance of a near-disaster at sea (The Great Iron Screw).

To realise his concept fully, Seth has engaged a small supporting cast comprising his father Geoff and sister-in-law Cara Dillon (both of whom contribute vocals), Benji Kirkpatrick (guitar, bouzouki, vocals) and Ben Nicholls (double bass). Seth and his crew give some wonderfully intimate performances that convey with true sympathy the more sensitive nature of aspects of the tale. Seth's own playing and singing has arguably never been more beautifully controlled, though without losing sight of the rugged, rough shadings where required. However, the combined forces when used prove suitably weighty, with rhythmic drive aplenty, as on Pilgrim Brother, the shanty Sailing Time and The Digging Song.

This is a thoroughly recommendable album, and the whole package is lavishly presented, with booklet containing full lyrics and credits and sporting supremely attractive artwork. And an excellent recording to boot. A Pilgrim's Tale is one concept album that's built to last, well beyond the purely temporal relevance of its commemorative aspect.