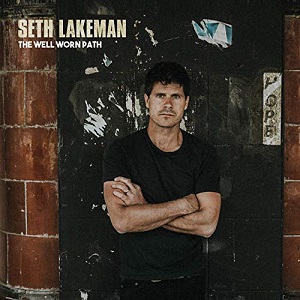 
A signature dynamism has always been a key feature of Seth’s music-making, and his live shows have essentially been an uncompromising, ear-burning, suitably visceral experience notwithstanding the sensitivity of his writing. Even on record, though, his dynamism has been retained all the while the studio environment (or its all-important spatial location) has enabled a greater concentration on the songwriting aspect, distilling that unique essence of his native Dartmoor.

But listening to The Well Worn Path, Seth’s ninth solo album, there can be no doubt that his recent tenure in Robert Plant’s Sensational Space Shifters backing band seems to have facilitated something of a shift towards a more rock-inspired sound – additionally it might be thought none too fanciful to opine that his own vocals may sound to be taking on something of a Plant-ish quality on occasion (that’s not to discourage such an illustrious role-model, I hasten to add!). And his regular deployment of sister-in-law Kathryn Roberts on harmony vocals (something of a masterstroke IMHO) might well summon up comparisons with the Plant-Krauss (or even Richard & Linda Thompson) teaming – not without substance, as I come to feel more strongly on each successive playthrough.

But OK, let’s not make too heavy weight of the Plant comparisons, for Seth remains very much his own man. There may not be quite the usual degree of extensive regional-folk-tale element to this latest batch of songs, but Seth’s writing still bears the hallmark of solidity and craftsmanship, his life-tales and experiential musings still easily striking chords and resonances in the listener. In something of a departure subject-wise for Seth, She Never Blamed Him explores the angst of fading love, a subject also tackled in its hauntingly metaphorical portrayal in The Gloaming. Contrast is provided with the melodically less distinctive crowd-pleaser Drink ’Til I’m Dry, but matters are redeemed with the deeper, doomier thoughts of Judge Not A Man. The album’s pair of story-songs are based on West Country characters, but the more memorable of these, Educated Man, could easily relate to anyone’s particularly inspiring teacher-figure-cum-mentor. Other standout tracks Lend A Hand and disc opener Bright Smile both convey inspirational, if bittersweet messages to a thoughtfully stripped-back, fiddle-rich backdrop, while the title track forms an ideally wistful set closer.

A certain quality of rustic simplicity still pervades this new recording, which, in a departure from the unorthodox soundstage locations of preceding albums, was recorded within the space of a precious few days between Space-Shifters tours, in his own garden studio back home in Dartmoor. On the less “rocky”, fiddle-drone-rich settings in particular, a palpable atmosphere and sense of antiquity is preserved. And yet, at the same time, it’s not hard to imagine songs like Fitzsimmon’s Fight (the tale of a Cornish boxer) being sung by Plant himself even, and the straightforward no-nonsense backbeat also has an overtone of the classic Fairport school of folk-rock. Divided We Will Fall fairly motors along in would-be-punk protest mode, and features some predictably fiery fiddling alongside the guitar electrics. However, Dig New Ground’s parliament-set satirical politico-rock feels a touch routine in comparison with the rest of the album, and even the keen fiddle break doesn’t quite lift the track.

But otherwise The Well Worn Path is the location for much stimulating writing, and both songs and arrangements can be heard to bring out the best in Seth and his latest backing band (bassist and long-time collaborator Ben Nicholls, guitarist Kit Hawes, drummer Evan Jenkins and of course Kathryn Roberts). I quickly came to rate this new album highly, not least since there’s plenty of light and shade as well as gutsy spontaneity, and also because Seth has reined in (tempered) some of his earlier style excesses. This set bears repetition in a way that stimulates the palate just enough, whereas some earlier extravagances felt slightly wearing on further exposure. Indeed, quietly stupendous might be a good description for Seth’s Well Worn Path.

Divided We Will Fall