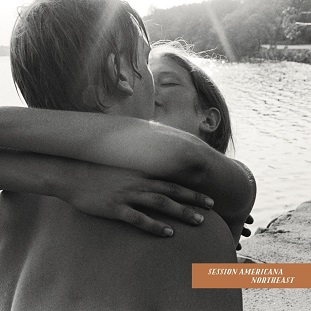 
An ultra-gifted, rotating collective of singers and multi-instrumentalists." Not my words but the words of Rolling Stone magazine, 'North East' finds the a cast of eighteen trawling popular and folk music from the North Eastern states of the US before passing through the Session Americana filter. It's a diverse collection that sees them gathering eleven songs (with three bonus tracks on the digital version) with no preconceptions and adding their own contemporary spin on a half century of song. You'll find some of the major names such as James Taylor, Carly Simon, Patty Griffin and Tom Rush mixed up with Jonathan Richman and Donna Summer, yet interestingly, Steven Beeber's sleevenotes are keen to point out how the tunes are firmly rooted in the English tradition of the industrial revolution.

He also picks Bill Morrissey's 'You'll Never Get To Heaven' as highlighting the contrast between the former prosperity of the mill towns (not dissimilar to the Lancashire cotton trade) and the decline of the once proud industries. There's also 'Merrimack County's nod to the days when a certain Robert Zimmerman was enhancing his reputation, the times a-changin' - at the head of the folk revival in Cambridge's Harvard Square. It's a typical selection that showcases the general theme yet doesn't set off a flood of despair and melancholic woe.

The Pixies 'Here Comes Your Man' is a more lively offering given a rumbling and rolling treatment followed by 'You Go Your Way' sets off on a cool groove before Donna Summer's 'Dim All The Lights' (sorry to disappoint anyone hoping for an interesting take on the disco pumping 'I Feel Love') gets a soulful wash. A nod to the familiar new wave pop of 'Roadrunner' that gets driven along on a bed of banjo while constantly threatening to break loose.

Several albums down the lines, anyone new to Session Americana via North East may find themselves scrabbling to catch up on their other directions. Those who've been along for the ride will enjoy the latest incarnation and selection of material.