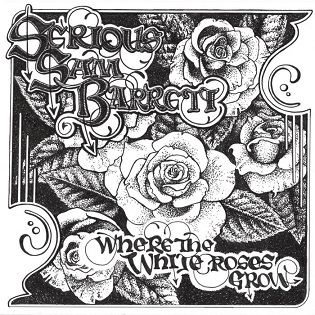 
Hailing from Leeds, Serious Sam Barrett's latest offering 'Where the White Roses Grow' is an album that dances between Americana, Country and English Trad and manages to blend together a wonderful and heady concoction.

'The Last of the Yorkshire Outlaws' a Barrett original, is reminiscent of 'Transmetropolitan' by The Pogues, where MacGowan regales, laments and romanticises the underbelly of London, Barrett similarly, poetically and with intense imagery, manages to capture a town where the local characters and often unscrupulous customs are played out in song.

Barrett is not averse to mixing things around on this album, enlisting fiddle work on several tracks but also is comfortable to change from trademark 12 string Guitar to a cappella singing or Banjo. 'The Holmfirth Anthem' taking duties with a cappella singing. This old Yorkshire traditional song, sung by The Watersons decades since, is revived for a new audience.

Not shying away from other Northern English traditional material 'The Waters of Tyne' & 'Robin Hood and the 15 Forresters'. The latter being one of the Child ballads. (139) Barrett is not afraid to tackle some of lesser trodden English songs.

Further original compositions 'Tennessee Line' evokes images of rustic country-livin' whilst the closer 'Darling Where You Are' is a gorgeous a cappella ballad to close off the album.

'Where the White Roses Grow' is a comfortable and confident album that sits between Americana, British Folk with a dashing of raw exuberance that can only come with a background of Punk Rock. I'm not one for comparisons but if Frank Fairfield had cut his teeth in a Yorkshire folk club with The Watersons, it might sound something like this. Well worth checking out.

Back On The Jack