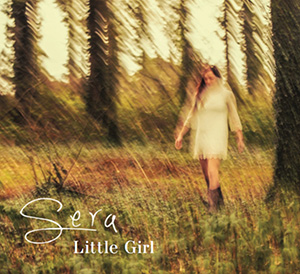 
Wales appears to be entering a bit of a golden period at the moment, and sorry to disappoint the footie fans, but it was happening before the success at Euros, with some real innovation and excellence across a number of genres. From a personal point of view it's something I'm more aware of across the acoustic spectrums, but am definitely picking up on it elsewhere, more interesting it seems to be happening both in the Welsh speaking camps and outside of it.

Predominantly, SERA is in the later camp, but her debut album, "Little Girl" also the title of the first single from the album, also has a track, "Mond Am Eiliad" recorded in her native language and it makes listening to the album a richer experience for it. Ok that sounds a little glib, but let me put this in a context.

SERA delivers a great range of songs, in all honesty it's a collection of songs more than an album, but that's not unusual in a post streaming world, where buyers can chose to buy anything from all the tracks to one, its more that it makes you stop and think this is different, almost dragging you back to revaluate that that goes before it.

That that goes before it, predominantly has rock and Americana cores, though there's also a number of tracks with a softer, more folk pop tone. The music feels like it's being bent towards the songs, rather than the other way around, bringing the most out of voice and melody and doing a fine job of it.

There is a lot about "Little Girl" that makes me smile. There is a jauntiness in the delivery that leads to head bobbing and toe tapping and a very positive mind to listen to SERA to. She also has one of those voices that makes you feel like you're engaged in a liberating experience, even as it draws on the darker side.

"Little Girl" is a good solid and honest piece, but if the rockier side of the album is much more your thing, there is an EP, "Rock" distilled from that side of this cut. Either way, SERA comes recommended.