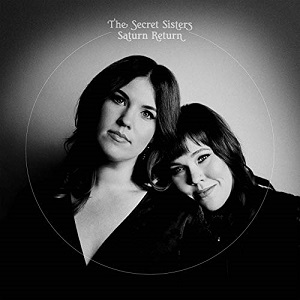 
THE Secret Sisters regard themselves as southern women in the 21st century, convicted by their beliefs - and, while they feel lucky to have one another, they have declared that women, generally, need each other more than they ever have.

These sentiments flow through this offering with grace and yearning, including deaths and births, as well as other deeper challenges that have led to achievements, yielding a sense of salvation, even.

Alabama sisters, Lydia and Laura Rogers sound as good as ever, together or singing solo for the first time on a record at the behest of producer, Brandi Carlile and her bandmate twins, Tim and Phil Hanseroth.

The album, the duo's fourth release and the follow-up to You Don't Own Me Anymore from 2017, rather grandly takes its name - Saturn Return - from the astrological occurrence that takes place approximately every 29-and-a-half years.

Over the ten tracks we find the sisters looking at what they see as an unfair world and admiring women's resilience in songs that include the candle-lit atmosphere of the ballads, Late Bloomer, Hold You Dear, Healer In The Sky, plus the wonderful and plaintiff Nowhere, Baby, a dream of a track with heartfelt lyrics:

"I made some money, made some friends and some memories to hold /Crossed the mountains and the valleys, fought the swelter and the cold / From a different angle maybe this adventure could seem grand / But the one I miss too often is being there to hold your hand."

Playing Tin Can Angel over and over again is unavoidable as the sisters dive headlong into slo-mo, honky tonk Lucinda Williams' territory: the song makes its way over gravel roads with solid band work, guitar breaks, sleepy piano and soulful/country vocals - it is staggeringly good.

On opener, Silver and the understated pop/rock of Hand Over My Heart, the trademark harmonies grab the attention while Fair rubs along nicely in an acoustic folksy way to demonstrate their abilities to switch moods seamlessly.

The Secret Sisters are fine songwriters who have fought back from well-documented music industry battles and turmoil to deliver an album that tackles emotional issues head-on with confidence and compassion. Overall Saturn Return is uplifting and in parts downright marvellous.