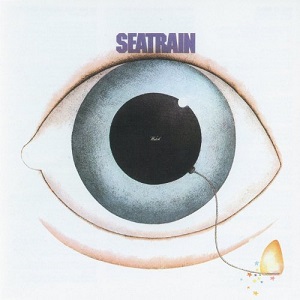 
Seatrain was an American roots-fusion band that formed in the creative melting-pot that was 1969 in Marin County, California. It played a broad-minded post-psych mixture of country, blues, rock, soul and jazz with a touch of folk, and in that respect were musical cousins to bands like the Band, Grateful Dead, Little Feat, Allman Brothers and It's A Beautiful Day. They also gained a cult following, not least through continuous collaboration and cross-pollination with The Blues Project, the Al Kooper vehicle whose epic second-album instrumental Flute Thing was revisited for Watch, Seatrain's fourth and final album (released in 1973). As far as personnel was concerned, it was Blues Project's Andy Kulberg and Roy Blumenfeld who started Seatrain (as Sea Train) back in 1968, shortly thereafter adding vocalist Jim Roberts and later keyboard player Lloyd Baskin. Some confusing lineup changes and reformations followed - too complex to go into here - but variously involving the recruitment and departure of Richard Greene, Peter Rowan and Larry Atamaniuk, among others.

By the time of Watch, the band sound had become altogether less distinctive, having jettisoned the violin that was so characteristic of their earlier records. There was a heavy reliance on guest session musicians, playing an array of instruments like accordion, tuba, oboe and cello, and each successive track seemed almost to be in a different style. Eclectic certainly, but not entirely satisfying - the listener was left in a quandary for sure. Kulberg had a hand in virtually all the disc's compositions, but seemingly with no defining or common musical signature. Peter Walsh's strident guitar playing was much in evidence and funkier passages crept into the more anonymous of the rockier tracks like Pack Of Fools, while the bewildering diversity further embraced the rowdy North Coast and even the vintage jazzband-jugband-flavoured throwback Bloodshot Eyes, with a Dylan cover (Watching The River Flow) thrown in for good measure. Perhaps it's indicative, though, that the album's finest moments come on the aforementioned Flute Thing, the medieval-folk-inflected Abbeville Fair (co-written by Kulberg with the departed Greene) and the folky story-song Scratch.

In the final analysis, Watch may perhaps not have been a particularly unified product, but it still has its pioneering moments and there have been many less distinguished swansongs in the annals of rock and it's good that BGO have made it available again. Since BGO have already re-released the band's two Capitol albums, it would be great if they could complete the set for us by reissuing their A&M predecessor from '69.