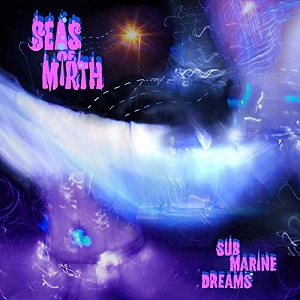 
I want to start off by enjoying the names of the tracks on this album. If my history with Seas of Mirth are anything to go off then the titles are half the fun. This album is no exception, we go from the clever 'Pearl of Peril', to hilarious 'I Need to Have Your Babies' and lands us with a fair few examples of the just plain mysterious that makes you instantly want to listen 'Jellyfish Metropolis'.

One of my favourite things about Seas of Mirth is how they manage to balance comedic value with interesting song writing. They are a serious band, but just don't take themselves too seriously, in, in my opinion, the perfect balance.

This third album however, is a little bit different, takes an ever so slightly more serious tone and aims to really submerge you (See what I did there?) in the deep ocean world. It works. It is still recognisable as Seas of Mirth but shows how the band has developed and grown over the last few years.

I decide not to start listening to the album at the very beginning, and instead opted to pick the second track to be my first choice, it is the shortest and would give me a sense of the new direction. 'Ink (Do The Blollop' has an absolute banging guitar core mixed in with a lovely helping of electronic sounds and sound effects. Seas of Mirth have used sound effects before and always used them well, so I was excited to see how the use would continue.

My next choice was the curiously named 'Klank Klank', it opened with a bizzare wall of gurgling vocals which immediately made me think of someone trying to sing under water (Or drowning). This actually gave me goosebumps before then hitting me with another array of instrumentals before finally the vocals of vocalist Al Judders kicking in to add the finally cherry on the top of the cake. What I found with this album is the actual music is on a different level to either of the previous albums. Don't get me wrong the music in both previous albums was good, but this was just different, good different. It felt like rather than putting music to a story or anecdote, the music became equal footing with the story.

Next I had to listen to the two tracks which named that intrigued me most. 'Happy Hour at El Squid Diablo' and 'I Need to Have Your Babies'. Well I must say 'Happy Hour…' is just brilliant. Spanish inspiration in the music (Nice touch), but just made me feel like I was in some seaside bar having a cocktail as the moon lit the beach. I actually shimmed a little bit in front of my computer as I listened. This track is fun. I wouldn't even want to try using any other words in case it took away from how fun the track is.

Now for 'I Need to Have Your Babies', I just had a feeling it was going to be something unusual. What I got was a wonderfully psychedelic sounding piece which I feel is a real crown for the whole band. Everyone had their part and the group made their harmony with each other work perfectly. There is a sophistication to this track and the overall album that just makes me feel that Seas of Mirth know each other a little like a family, their harmony as people playing and singing just all slots together like a music jigsaw that has had the final piece tapped in. Its nice, it shows that Seas of Mirth have done what they wanted, changed focus enough to still be the loveable sea dogs they are, but just… bringing something new and different.

Interestingly 'Sub Marine Dream' had a very unique sound and wouldn't seem out of place with anything you hear in the charts these days, it is a much smoother track to the others, which makes it a very nice way to close off the album, but it also has a slight change in how the vocals sound. The vocals are calmer in some ways to this track, which makes a nice change to an exciting album.

Seas of Mirth go from strength to strength, having reviewed their last two albums I really enjoy the fact that where I was previously making predictable pirate jokes to having an album that shows just how talented each and every one of the musicians in this group are. There is something on this album for everyone. From traditionalists to jokers, Seas of Mirth have not disappointed.