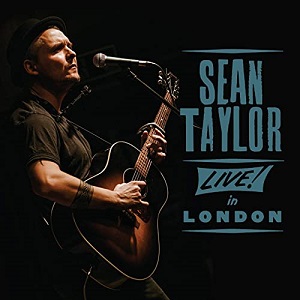 
Once in a while you find an artist at the top of their game. Sean Taylor's "Live in London" is a compelling album, and for me the live album of the year so far, possibly the album of the year full stop. Few performers can carry an audience on the back of just a single instrument, with a harmonica thrown in for good measure for just one of this record's 17 'must listen' tracks. There is a warmth in Sean Taylor's performance that has you hankering for the return of true 'live', and here he follows in the age-old tradition of the top guitarist with the unconventional voice that just seems to work. Every time.

Taylor takes you from gritty to gorgeous and back again several times through this album, from conventional folk love songs, through smoky-sleazy jazz-blues, to good honest boogie-woogie, and more: an album that once you pick up you won't want to put down. You will hear inflexions of Nils Lofgren and John Martyn in the vocal, Cohen and Kerouac in the lyricism, Roy Harper in the stunning acoustic guitar work, the rhythm and soul of Eric Bibb, the passion of Richie Havens, and the delivery of Loudon Wainwright III. You will hear world music influences in Sean Taylor's arsenal of songs of love empathy and protest.

The album opens with "Heaven". This song seemed to take me on a journey around musicians who were in their pomp in the 1970s and 1980s, but the similarity of which I write is fleeting suggestion rather than plagiaristic. This is original work from a fine musician who has listened intently to the skills of others over many years. There is even suggestion of Stanley Jordan's finger-style jazz blues in there, providing a melange of hooks to encourage a whole album listen. " Texas Boogie" is a statement of Taylor's devotion to folk-blues, with the lyrics citing some of the genre's finest writers and performers: Lightnin' Hopkins, Townes van Zandt, and Stevie Ray Vaughan. It's a vibrant sound to get the feet tapping and the voices honed.

It doesn't take a genius to understand "Little Donny", a justifiable vilification of the most destructive President of the USA I've known in m y 62 years on this wonderful planet. Trump is not to be ridiculed. He is just as dangerous as this song declares: "when he drained the swamp all he found was guns". Back across the pond and we have the spoken word rap-infused vocal of "This Is England", lamenting current political and societal trends: "As we Morris Dance to Brexit". The guitar chord structures that underpin this delivery are sublime.

"Hold On" opens with atmospheric Moorish guitar licks and the song has a feel of Luka Bloom about it. There are a number of stand-out songs on this album of terrific songs and for me, this is one of them. "Perfect Candlelight" follows, with pin-drop excellence in the live delivery. A true, folk love song with warmth, passion and pain: "I lay by your side in perfect candlelight".

The precision of "Calcutta Grove" is outstanding. This may sound like free style guitar but the timing in this piece is absolutely stunning, with a Harper-esque quality. "Feel Alright" is another foot tapping boogie with lyrics to match the sound, "Drink with the devil if you're feeling at home", followed up by a fabulous cover of Skip James 1960's classic "Hard Time Killing Floor Blues", which comprises the album's first incidence of audience participation and an acoustic blues guitar solo to drool over. "The Only Good Addiction Is Love" slows the pace down and demonstrates the ease with which Taylor holds the attention of his audience. Lyrically beautiful delivered with silk in the vocal, there is some very fine picking throughout this rather lovely song.

"Lorca / Heartbreak Hotel" sees a flourish of flamenco blues introducing a cover of a song that became one of Elvis Presley 's trademark songs (it was co-written by Tommy Durden and Mae Boren Axton), which metamorphoses through a blues second phase and produces some of the finest guitar work on the album. "Nightmares" ramps up the quality of the guitar delivery still further with its driving rhythm forming the backdrop for a rap style vocal that is spat out in the manner of an evangelical preacher. This is my personal standout song on the album.

Taylor is a master of mood, and commemorates World Mental Health Day with a song for those who suffer with chronic depression and other mental health challenges "The Path Into Blue". The song will resonate with anyone who has suffered: "You will only find what is true when you survive the path into blue". The guitar delivery in this album just keeps on getting better, and in "So Fine" the delay effect used seems to embrace the spirit of this descriptively passionate love song.

"Stand Up" is a lyrical stand out, Extinction Rebellion song, where a second instrument appears for the only time in this entire live delivery, a blues harmonica, This is the album's most 'in-yer-face' protest song:

I have listened to this album intently several times now, and "Troubadour" is how I came to regard Sean Taylor. This is another beautiful song or gentle pace that galvanises further audience chorus participation over some more crisp guitar work. And so to the final track "Basho / Anji / Hit The Road Jack" (if ever there was a more appropriate song for a live musician to end a set with I'd like to know it!). This second medley of tunes combines Bert Jansch's "Angie" (here Anji) with a cover of the 1960 Percy Mayfield song made famous by Ray Charles some years afterwards.

If there was any justice in this world, everybody will begin to talk about Sean Taylor as one of the finest songwriters of his generation. But there seems to be a lack of justice at almost every corner as we all work as human beings to try and make this world a better place to live our lives. This is Sean Taylor's contribution to the cause. Buy it.

The March Is On