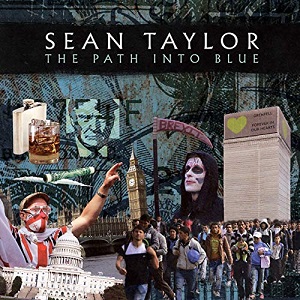 
A Blue Moon sets. A release screams for the plaudit of "Album Of The Year". You know your heart is set.

"The Path Into Blue" is singer/songwriter Sean Taylor's latest in a long list of recordings made in Austin, Texas.

An album for the troubled times in which we live, a stand against injustice and unfairness. An encouragement to raise our collective game, to rally, to come together, to look for the best rather than focus on the things that set us apart. Then, when we have considered the demons of society, to look inside at what is lurking within us.

It begins. Breathe in. Breathe out.

A spoken stream of consciousness, lines of poetic angst, "This Is England" examines our Britishness in 2019.

Lyrics that hit the target time after time "Born and raised under Maggie's cane, since when did love become a strain, in this epoch we will find, a broken generation left behind…. Celebrities on ice or in the ring, been on a journey just don't get them to sing".

A funky beat drives it along "Everyone has some kind of condition, it's an anti depressant competition…. Sugar is the new nicotine, but smoking kept me thin, with a sexy old yellow tooth grin, might have a shadow on my lung, but darlin I always growled when I sung".

A rap? A rant? "We want our country back they scream, but now they can't find where they left it, as we Morris Dance to Brexit…. No one likes us we don't care, Britain is only Great when it bombs everywhere, we don't want immigrants only millionaires, hearts minds and chat show prayers."

Chosen as the lead single from the album, the song concludes, "So write me a jingle with a million hooks, WhatsApp me Mr Shakespeare ain't no time for your books, this is England with a cuppa tea, a can of Stella singing 'God Save The Queen'…. Breathe in / Breathe out".

From England to Italy, "Lampedusa", an island, entry point for those refugees fleeing horror. We watch on TV but fail to see. "I wonder why" implores Sean. He's not alone. Thoughts that need to grow.

So to "Grenfell", heartfelt emotions, strong words "Is the money you make worth the lives you take? Make no mistake the only truth you own is fake". A blistering electric guitar evokes the pain that scorches through the track. Justice, a short word that belies the length of it's implementation.

A laid back blues, Joe Morales blows a soulful sax "Little Donny", attentions turned across the pond. A child in charge. "Racist, xenophobe, misogynist, fake news, tax cuts, hateful politics". It's hard to find positive against the insular ignorance of the 45th President.

Not that we in the UK can claim the moral ground, Sean's husky vocal on "A Cold Wind Blows" takes us on a tale of homelessness in London. Mark Hallman marches the song along with his bass and drums, Taylor's classical guitar uplifting whilst Henry Senior on pedal steel adds the mourn. People die on the street, more millionaires become billionaires and tourists feed the birds. A picture painted of a broken society.

"Take It Down To The Mainstream" rocks, it's everything that manufactured shows like X Factor aren't. Real music lashing out at pap.

From the extrovert to the introvert, "Tobacco and Whiskey", a late night attachment to alcohol in the knowledge that acceptance isn't always a good thing. "Number 49" addresses a stronger addiction, that of drugs, no moral story here. Number 49 the supplier's door.

Drugs, alcohol and then depression. "The Other Side Of Hurt" takes us down into the darkness, those places where even if you could see the light peeking through you aren't quite ready to look up.

"In The Name Of God", a plea for peace, a gospel feel of a full band including choir, admonishing those who use religion to justify violence. "Peace shine on, show hate that it is wrong, when we hope in the name of God".

Mellow acceptance, to close, a love song, a broken heart that yearns, a beautiful melody "You will only find what is true, when you survive, the path into blue".

"The Path Into Blue" has the sentiments and power that those early Dylan albums had all those years ago, you might not be able to save the world, or even yourself, but listening to Sean Taylor's latest release, it makes you want to try.