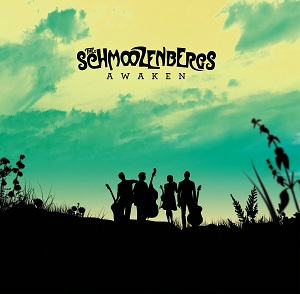 
The Schmoozenbergs play upbeat instrumental music, Cafe music. The interplay between Sam Stennett and Tom Brydon-Smith's guitars and Gina Griffin's violin will definitely have Stéphane Grappelli and Django Reinhardt raising a glass in the hot club eternal. The whole album sounds like it was recorded in the Arles cafe in Van Gogh's Café Terrace at Night, or in a smoky Parisian bar smothered in Alphonse Mucha imagery. I don't think it's coincidental that the bands' name graphic has similar graphics and edging to Guimard's evocative Art Nouveau 'Metropolitan' typography used on the Paris Metro. The cover also put me in mind of the figures on the sleeve of Pentangle's 1968 debut, those evocative figure silhouettes. With two nimble fingered guitarists, a rich double bass and music that straddles genres including Jazz and Folk maybe the comparisons run deeper, they just need a tight jazzy drummer who is a fab hand on the glockenspiel.

'Cortisol Swing' and ' Runaway' have that beautifully lyrical and swinging guitar that is pure Martin Taylor on his cover of Robert Palmer's 'Johnny And Mary'. Beneath the two bright and upbeat guitars there is also the menace and passion of the violin. On 'The Long Road' one of the guitar lays down a percussive rhythm in this drum free quartet, while the other guitar and the violin fly over the top. Gina Griffin is all over the violin, at times part way between Jazz Age Ellingtonian vocalese and Peter Frampton's voice tube thing you can almost hear words in a, way that is simply stunning. This is an album with its tongue in its cheek and a smile on its face, track titles like 'Cortisol Swing' and the bands name itself raise a grin. Sometimes, benneath the smiles, like on 'Charmed Snake' with its Arabic sound scape and the title track there is a whiff of tension and a darker atmosphere. The album is recorded at Peter Gabriel's Real World Studios in Wiltshire, so the whole thing sounds amazing, guitar strings chime and snap and Ron Phelan's Double Bass sounds impeccable, rock solid and clear. Closer 'Finale' has it all, atmospheric bowed Bass, the silent movie Gypsy violin and then we driven to dance by the exulting band and the hypnotic music. This is unashamedly good time, beautifully played music with atmosphere, that possesses your body and forces you to move.