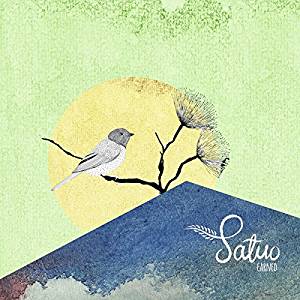 
A five piece based in Vienna is as good a place to start as any. The quartet that make up Satuo ('Satu' being Finnish for story or fairy tale) play and are influenced by many genres. So a trawl through 'Earned' will have you encounter songwriting influenced by folk, blues, jazz pop and tango.

Musically there's a similar melting pot with the usual banjo, mandolin and melodica accompanied by the haunting wail of the musical saw. Three voices and a drum/percussion and bass rhythm section promises plenty of variety.

Flitting between languages, 'One Day' opens the set with a straightforward country strum and shuffle and with a message of hope and a hand clapping interlude that's one step from a gospel reaffirmation. 'Pardon Me' and further down the line, 'Muista Minua' Offer up a Gallic flavour; the feel of French cafés and swaying brass

At any point, sparse banjo picking is just as likely to crop up as the string drenched folk of the melancholic title track or swinging lounge jazz while 'Water' compared with what comes before and after, rocks out. After an opening which gives no inclusion of what's to come, the spirit of Carlos Santana slowly emerges in a Latin fusion guitar breakout. It's an example of the dynamics that repeats with 'Mein Land' where the lengthy lyric gives way to a building rumpus. One that expands the boundaries of 'Earned' in an unexpected direction alongside a quaintness and quirkiness that pervades the album.

Typical of a never quite knowing what to expect next uniqueness, 'Earned' is a trove packed with constant surprises and delights.