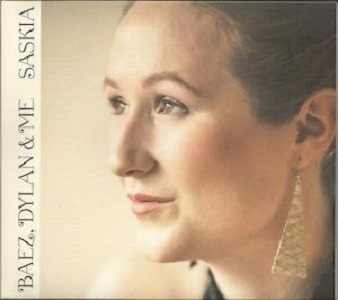 
The impending celebration of the Woodstock Festival's 50th, led to Saskia pondering what would she have sung on that stage. From that dream grew BAEZ, DYLAN AND ME, an album that grew out of love. A musician's love of these songs and fans desire to hear them. Grounded in the coffee shop folk singer tradition of the 60's and beautifully recorded at Abbey Road studios, a place steeped in love and its open traditions, this is a warm uplifting set of recordings.

Listening to Saskia it is clear she knows the writers and the originals insides out, managing to keep their spirit while finding something new. "Diamonds And Rust" is for me the stand out track, Griffith-Moore nails the vocal, sharing Baez's pure slightly melancholic voice and letting the notes soar. Kit Hawes guitar accompaniment and the bowed bass is tasteful and inspired too. Saskia's reading of "Blowing in the Wind" is soft and reverent at first with the strident folk singer, with her fine voice handling both perfectly. "Knocking On Heaven's Door" also features Joseph O'Keefe's superb violin, Saskia's vocal is more intimate and measured with the violin providing some of the emotion and spark in a remarkable understated version of the oft covered song.

"Farewell Angelina" is another pure intimate performance by Saskia. Mandolin and guitar give "Don't Think Twice" a bluegrass feel with just a hint of longing in Griffith-Moore passionate vocal. Love the surprising guitar touches in the last verse. "Forever Young", given the passage of time and the age of the Woodstock generation, takes on a particular poignancy. Saskia's voice is beautifully doubletracked on the chorus to great effect. Dylan's "It Ain't Me Babe" is delivered with spark and a lyricism on the chorus especially. As I had to constantly remind my kids, "Make You Feel My Love is a Dylan song, not by Adele. Saskia manages to get the sense of the Dylan lyric and the soaring gospel passion of Adele's performance. Griffith-Moore delivers a sweet voiced but rousing version of "The Times They Are a Changing". The power of the lyric being that it is as powerfully relevant now as it was then.

The studio itself seeps into the consciousness with an intimate version of Lennon and McCartney composed "Let It Be". There are some fine vocal arrangements with harmonies that are beautiful rather than showy, uplifting rather orchestral. There is a simple guitar and piano motif but Saskia's voice is absolutely the star. A tasteful, sophisticated performer with a beautiful voice I think the Aquarian crowd and flower children at Woodstock would have loved her voice and her warm confident renditions of some of the songs that define their generation.