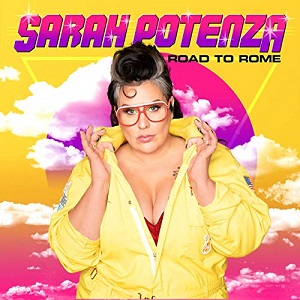 
Released on International Women's Day 2019, 'Road To Rome' is Nashville based Potenza's second solo album. Its sudden opening prepares you for an album that is unashamedly in your face, but which at the same time manages frequently to be beautiful. This is delivered from the heart. It's gutsy, direct, and it doesn't spare blushes.

Described by Rolling Stone magazine as "to blues what Adele is to pop", Potenza unleashed the power of her voice on The Voice's eight season in the USA. This album is vocally dominant but there are no vocal acrobatics, just a tremendous, passionate voice full of controlled power and soul. People will undoubtedly draw comparisons with some of the finest female jazz, blues, Motown, '70s funk, and pop singers through the decades, but this record also embraces Hip Hop influences, and subtle hints of Grime.

The opening track 'I Work For Me' has a gentle build to it, sprinkled with some interesting synthesized backing vocals, and if you aren't tapping your foot by half way through there's probably something wrong. The first five sub-four minute tracks continue to deliver a punch, not least the uncompromising chorus of 'Dickerson and Queen', where the tempo may be slower but lyrical temperature rises to boiling point. I couldn't have summarised it better than "if you like the straight and narrow this is not for you".

'Who Do I Think I Am' has a ring of Tina Turner about it, but the most impressive thing here is that Potenza's voice is minimally produced. You are in no doubt that this is what she sounds like and it gives the record a 'Live' feel. 'Diamond' is the track where Potenza begins to show her true colours, entering Grime territory and using the full range of her voice, almost like it has been slightly restrained up to this point: power, aggression, range, and softer touches all in the same song.

Justin Wiseman's piano introduction to 'Earthquake' slows the pace and hints at the kind of collaboration it takes to produce an album of this quality. This is a love letter to Ian Crossman her husband and co-producer (Wiseman is also involved in its production). The song is high calibre, packed with emotion and love, and really hits the mark in a way that the late Whitney Houston might have achieved in her prime. The quieter, more reflective pace continues into 'Worthy' (a cover of the Mary Gauthier's blues ballad) before 'I Believe' gives the album a lift, both musically and lyrically, harking back to '70s soul funk and with empowering lyrics packed with empathy: "Even when nobody does, girl you know I do".

The empathy and female solidarity continues with 'Keep on Holdin', and for me is one of the album's highlights. The introduction of a second vocalist adds to its gospel textures, lyrically packed with gems such as "this life is like a tattoo I will wear to my dying day". At first I wasn't sure about 'Happiness', probably because of its playful keyboard accompaniment, but subsequent listens show this is a fun, self-deprecating song that provides the perfect foil for the title track.

Title tracks sometimes don't live up to their billing, but here Potenza really does save the very best until last. 'Road to Rome' is a stunning song. Anyone would be happy to write or co-write a song like this, but if they also had a voice like this to deliver it they'd be somewhere on Cloud Nine.