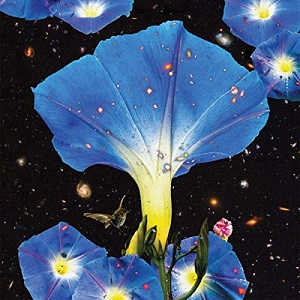 
This new album from North Carolina guitarist and singer Sarah Louise Henson couldn't, at least on the surface, be more different either from its predecessor Deeper Woods (which I reviewed on this site exactly one year ago) or her work with Sally Anne Morgan as the duo House & Land. Both of those albums centred on her vocals rather than her amazing guitar artistry - although it must be said that those records were themselves a departure for Sarah Louise following an initial couple of experimental guitar albums. Confused? OK, cutting to the chase - Nighttime Birds & Morning Stars is a record dominated by electric guitar and effects, but some tracks do incorporate Sarah Louise's soaring voice, normally in a wordless capacity, thus providing both a link from and a unity with her previous work. For her, ther natural and the psychedelic are indelibly linked through their ability to provide healing. And yet, make no mistake, it's a challenging listening experience.

For Sarah Louise, the process of engineering Deeper Woods has paid dividends for the new album in terms of a greater confidence in using a recording program. Inventive digital manipulation of the sounds of her guitar (this time an electric one, and in standard tuning!) creates veritable oceans of texture, all the while breaking individual sounds up into their components, enhancing or magnifying single notes or frequencies, or fracturing rhythms and tonalities. Moving beyond folk forms and warping them beyond recognition, the eight tracks comprising Nighttime Birds… synthesise the musical and the spiritual, blurring the boundaries and creating warmly mesmerising and involving soundscapes and intriguingly multi-directional sound patterns - in an almost visual way. And that sure is uncanny.

Each piece inhabits its own unique biosphere, and functions almost as an illustration of her personal life-pulse. Starting, in fact, with the soothing miniature Daybreak, which superimposes Sarah Louise singing the first verse of the Appalachian hymn Bright Morning Stars above and amidst the dawn chorus and a devotional drone; it's the sound of the whole world awakening, and with it the spirit. R Mountain doesn't quite get to develop its clattery riff, and the skittering cacophony of Ancient Intelligence erupts before settling down into a passage of restless Fripp/Melton-esque dislocation couched on a bed of repose. Swarming At The Threshold whimsically and playfully explores and exploits loops of almost conventional guitar sound, with melodies and harmonies shifting around against and across each other.

Rime is the only track to revert to manipulation of acoustic 12-string guitar sounds, which arise out of a colossal drone figure like a hesitant fledgling craft breaking through into the upper atmosphere. Late Night Healing Choir and Chitin Flight both incorporate wordless vocals; the former intones separate oriental-sounding sequences in cool counterpoint against a quietly drifting organ drone, while on the latter the voice acts as the calming influence on a musical landscape of space-creature synth chirrups and chatterings. The disc finale, its eight-minute title track, is a meditative yet exhilarating exploration that both illustrates and requires patience of mind, developing into an intensely rewarding and sincerely devotional experience.

An album that's both stunning and possessing genuine healing properties, both gently thrilling and therapeutically calming - sometimes both at the same time, and thus real hard to describe in words.

Hard On A Heart