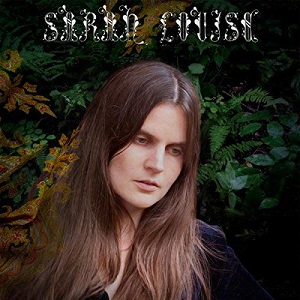 
I first came across Sarah Louise (Sarah Louise Henson, to give her full name) as one half of the House And Land partnership with Black Twig Pickers' Sally Anne Morgan, a teaming whose eponymous album of teasingly arranged traditional material so intrigued me when it appeared towards the end of last year. But it turns out Sarah Louise had made a couple of solo albums prior to that, on which I understand she explored the sonic possibilities of the 12-string guitar in an unorthodox fashion. Even more interestingly in view of this, then, I learn that Deeper Woods is the first of Sarah Louise's solo records to include vocals - which are actually the disc's most immediately striking element, rather than her guitar work itself (remarkable though that is).

It transpires that the new disc's seven songs, all of which are original compositions, started life as a cappella vocal pieces, although they've subsequently become clothed in ambitious scorings that unexpectedly accentuate their urgent, strange and often decidedly eerie nature. The central track, Pipevine Swallowtails, complements its extraordinary, almost cerebrally religious nature-imagery with an ethereally oriental sound-world conjured by Sally Anne's violin drone (inevitably, it's here that the album comes closest to the experimental microtonality and layered modal vocal harmonies of House & Land). The seven-minute penultimate track On Nights When I Can't Sleep evokes the insomniac's restlessness both in its intricate guitar adventures and interweaving voicings. Even more distorted electric guitar broodings both steer and punctuate When Winter Turns and the extended Up On The Ridge, where Sarah Louise's undulating vocal line swoops and dives through an increasingly rich and beguiling musical landscape.

Sarah Louise makes good sparing use of a handful of musician friends (on cello, bass, drums), but it's her own musical personality that rightly dominates. And yet on two of the album's tracks the signature of her own guitar is absent altogether: the unsettling The Field That Touches My House And Yours relies on synthesiser and piano for backdrop colours, whereas album closer Fire Pink And Milkweed is an almost subconsciously dissonant multi-layered a cappella evocation of the peace of twilight time. Here, as throughout the preceding six songs, a very unusual approach to melody is used to bring to life Sarah Louise's spiritual, and very personal, responses to, and reflections on, nature and the powerful sense of awe it inspires in her. Not for nothing does she describe herself as "an avid naturalist and forager".

Deeper Woods is an important, if at times challenging album. It inhabits a compelling and quite literally unique soundscape that's not at all readily describable. Experimental psych-folk comes close, but that's by no means the whole story. You just have to hear it.