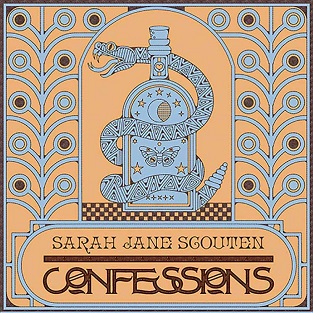 
Enticing a prospect as it may be, 'Dark Side of the Moon', the opening track on the now Dumfries and Galloway-based Canadian singer-songwriters latest album, isn't a Pink Floyd cover but, more strictly titled '(When Your Heart Is On) The Darkside of the Moon, a self-penned, organ swirled waltztime getting over a downer number on which the verses are sung first by Scouten and then in French by Antoine Lemaire.

It's an inviting introduction to an album that ranges across different styles, getting light and skitterish on the poppy 'You Are The Medicine', an upbeat number that uses addiction imagery ("Years of my life with needles stuck in my arm/Took every ounce I had to make it through") to sing about being rescued (by her now husband) from an unhealthy relationship ("His is the love of one that is reticent/But you came along without a precedent/He is the drug, you are the medicine").

The six-minute slow, bluesy country trawl of 'Breaking and Entering' also addresses dysfunctional relationships, this time told through someone on the receiving end of a scorned woman's revenge ("Waking you up with a red brick that she threw through the door"), but making it clear where the real fault lies ("How can you starve a stray dog that you fed the night before?") with the fear and refusal to make commitments ("it's something you should have seen coming 'cause you know they're all the same/You know that they won't quit until they take your name").

The idea that love bites back is there too on the dissonant rumbling blues rock of 'I'm A Rattlesnake' as she warns "don't you tread on me/If you don't like my bite, don't make me bear my teeth" and, as you might have now guessed, the album as a whole concerns relationships, some more autobiographical than others, and the impact they can have. Sung in her sister's voice, the jaunty country jog 'You Still Love Him, Kid' concerns being left behind by a sibling ("When you left home no one was ever there/I used to call you up 'cause you would listen/To my tears on the phone") in a home where a relationship is falling apart ("We both know there was always something missing/The silence and an empty plate and chair/Broken by an old red kettle whistling/Or the phone call when they told they were splitting").

Even more powerful is 'Pneumonia (To Love)', a warblingly sung number with almost show tune elements that, touching on the death of her biological mother in childbirth when she was two and sung in the persona of a straight white female pseudo-intellectual, turns the gaze inward ("I've spent some time self-loathing") and talks of abandonment issues, of trying to please others ("I've written fifty songs I like/That's kind of an accomplishment/But nothing makes them happy/Like continuing the family"), the title referenced in the line about "how pneumonia gets in your lungs/And it weakens your resistance to love".

A particularly perky track with its chiming slide guitar lines and folksy tones, 'Show Pony' starts out describing the joy of acquiring and looking after the animal only to take a sudden turn into the dark with the sound of a crack in the sky and the line "the kids down the street like to play with their guns". Thankfully, it's all a metaphor about having to kill love.

The centrepiece, however, is 'Ballad of a Southern Midwife', an Appalachian-toned song about religious intolerance and sexual oppression ("Father was a preacher, cursing the ground at my feet/He said you little woman, you never listen to me") that she wrote for her 2011 debut album (then 'the' rather than 'a'), revisited now in the wake of the #metoo movement and the repeals of abortion laws in the southern United States, harking back to the dark days when "an angel of midwifery" was regarded as "practicing witchcraft".

The last of the self-penned numbers, set in fur-trapper times, the lap-steel streaked slow waltz 'Poison Oak (So Long Old Friend)', is another storysong about abandonment ("When you drove away across the prairies/Did you only do it to be kind/In your cruel little way you courted reason/And left the ones you love behind") blinded by love, only to realise it was a mistake "you can never undo".

The album ends with an Iris DeMent-like treatment of Alfred, Lord Tennyson's 'Crossing the Bar', set to music by Bertie Higgins, a poem about mortality and embarking on life voyages without regrets and with "no sadness of farewell", a tender, life affirming close to an album that often peels back the skin of emotional wounds to their raw nerves, but always finds a balm to ease the hurt.

You Are The Medicine