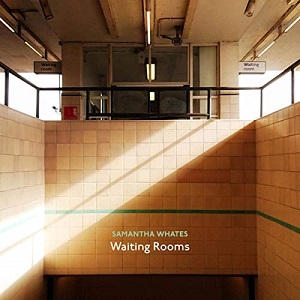 
Samantha's a singer and songwriter whose "Scottish roots (were) transplanted into London's soil in her teenage years", and this mix of geographical sensibilities certainly informs her music, although perhaps not in the most immediately obvious of ways. Sammy's debut album Dark Nights Make For Brighter Days (2011), with its limpid pastoral chamber-folk textures, made for a persuasive introduction to her world, her intimate and inclusive writing style mirrored in her unassuming delivery. Then came her teaming with Josienne Clarke in the duo PicaPica, whose album Together And Apart came out on Rough Trade a few short months ago.

Waiting Rooms is Samantha's second solo record, and has been a long time in coming - but (at the risk of making an over-obvious allusion) is definitely worth the wait. And all that despite some unfortunate delays, permissions issues, and funding difficulties due to the demise of Pledge Music. The album is the result of a special project to illustrate the universal scenario of the process of waiting, "lingering expectantly", which unites our human life experiences and which has been well documented within song traditions throughout the music world. But in this case there's one notable, and unusual, aspect to the presentation - Samantha's modus operandi was to record all of the ten songs "in situ" in "found spaces" - i.e. on location in just a handful of the various waiting rooms (scattered across the country) in which (almost inevitably) Sammy's doubtless spent several hours: recovering, hoping, dreaming, writing, travelling, leaving and arriving. Two songs were recorded at each of four locations: Hebden Bridge railway station; the old waiting room at Peckham Rye station (abandoned); the ferry terminal at Dunoon; and the old police cells at what is now The Island in Bristol. The remaining song (Guilty) was recorded at Loughton tube station near the eastern extremity of London Underground's Central Line.

Samantha was able to derive inspiration from the unique ambience of each location, whose resonance tends also both to transmit and be transmitted into and through the performances of the individual songs. All of these locations yield satisfying results and resonances, but each also has its own historical and geographical story to tell - aside from those brought to it by Samantha's songs. For on Waiting Rooms she "exemplifies how we're all concurrently living in the past, present and future" by tapping into these resonances and connections, and the result is quietly compelling in invoking potentially difficult psychological truths with not a little humour; having said that, there's also a smooth, almost easygoing feel to both the melodic invention and Samantha's delivery which is also very appealing. I was particularly taken with Cinema Song (Hebden Bridge), and Sailors (Dunoon), both of which keenly and honestly explore relationship issues and the not-always-acknowledged difficulty of "living with someone else's ideas".

By the way, lest you be considering accusing me of mis-counting, the album's bookend-tracks take the form of "fast" and "slow" versions of the same salutary song lyric (I Love My Life) - although to be fair, the difference is arguably as much one of mood as of pure tempo; the "fast" version, which opens the disc, is almost insouciant, done to a breezy shuffle beat (almost calypso in character), whereas the "slow" version is a more languid, contented-feeling swaying jazzy waltz that makes for an ideal disc closer. The attractive scoring, for clarinet, nylon-string guitar, double bass and brushed drums, provides additional unity, for both versions were recorded amidst the comings and goings in the entrance hall of Great Ormond Street Children's Hospital. There is indeed (as the handout claims) "beauty in the transience" of the "brief shared experience that will never happen again". A similarly transient, rare "sense of occasion" also prevails at Peckham Rye (location for Dark Waters and Daylight Savings), the abandoned waiting room at which is due for imminent conversion to accommodation.

For those listeners whose concept of "waiting music" is the "hive-inducing" muzak beloved of the call-centre operator or the clothes-shop changing-room, I say prepare to be captivated by Samantha's knowing, cordially conversational (and properly musical) observations, couched in a hauntingly spare lyrical soundscape that's so effectively characterised by her 16 musical collaborators and producer Douglas Whates. These particular Waiting Rooms are somewhere you won't mind spending time and lingering, as Samantha cordially invites you to "restore the concept of sitting still and doing relatively little into the pleasant, thoughtful and mindful act that it was in the recent past". Amen to that!