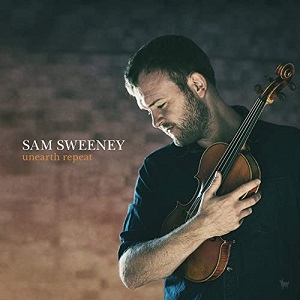 
As one of the era's leading exponents of the folk violin, Sam has a CV that takes in the mighty Bellowhead as well as Jon Boden's Remnant Kings, Full English and the bands of Fay Hield and Eliza Carthy, but here he sells us his own personal musical vision on the second of his solo ventures.

Now this is an album of tunes. So far so simple. But it's also a true companion piece to Sam's first solo album The Unfinished Violin, on which Sam played a very special instrument, a First World War violin of unique provenance. Unearth Repeat shares with that album the specific of execution in that it too was played by Sam on a specific instrument, a unique violin. In this case, it's the violin that folk maestro Dave Swarbrick had latterly owned, which had been built for him by Michael Burnham in 1997. It transpires that when Sam picked up the fiddle, he was struck at once by the depth of sound - and volume - the instrument contained and created, compared to his own First World War vintage instrument.

Thus, Unearth Repeat - which Sam himself has described as a kind of "un-concept album" (ha!) - steers a leisurely though purposeful course through a sequence of tunes of (in most cases it appears, equally purposefully) enigmatic origin - that is, to go by Sam's liner notes - all arranged in Sam's signature style: elegant and melodic with an unerring sense of development and structure, and delivered in a confident, relaxed manner. To aid him in this endeavour, Sam has enlisted a quartet of his favourite musicians, with whom he feels entirely comfortable - guitarists Louis Campbell and Jack Rutter, double bassist Ben Nicholls and Dave Mackay on piano and keyboards. The overall feel of the project is one of gentle control, understated tension and general sublime beauty - an ambience to immerse yourself in for maximum appreciation, so you need to invest close attention and let the music flow in the sequence that Sam provides; only by listening in this way can you derive the intended benefits. The most urgent (and animated) of the tunes is the jig-like centrepiece Dark Arches, which contrasts brilliantly with the tone-picture Winter 350 from which it leads. Similarly, Sam's inspired treatment of the morris tune Princess Royal arises out of the mists of The Old Wagon Way. This kind of juxtaposition of moods and textures is a grandly conceived yet entirely natural instance of Sam's skill in serving the melodic contours of a tune by loving phrasing and careful manipulation of elements, all the while retaining the highest level of musicality.

This is a satisfyingly challenging album yet also one in whose underlying exciting subtleties it's easy - and recommended - to get oneself lost. Repeated listenings only reveal further felicitous textural delights and progressions, all aided considerably by Andy Bell's expert production.

There was to have been a supporting tour in May, which I'm guessing will have to be cancelled due to the Covid-19 situation, but do check back for news of possible reinstatement later in the year.