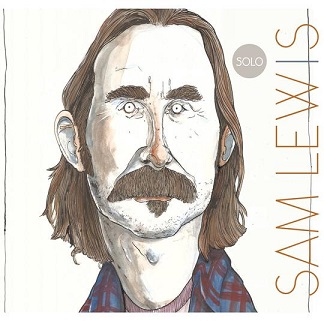 
I imagine most folks in the UK, myself included, won't have heard of the American singer-songwriter Sam Lewis. For the uninitiated, it turns out he has quite the pedigree. We are told that after spending a nomadic youth throughout the south-east of USA, Nashville became his home in 2009. Since then he has collaborated with everyone from Leon Russell to The Wood brothers with no lesser than the mighty Chris Stapleton dubbing him 'a modern Townes Van Zandt'.

To date he has released three studio albums, the self titled 'Sam Lewis' in 2012, 'Waiting On You' in 2015 and 2018's 'Loversity', all to great critical acclaim. On all three albums Sam Lewis has worked with the cream of musicians who ordinarily play with the likes of Chris Stapleton, Bruce Hornsby, Robert Plant and Lucinda Williams amongst others to create a sound that on his last record was described as 'seventies psychedelic soul, with a storyteller's eye, a swampy southern groove and an emotional, political punch'.

After over a decade of mostly solo performing behind him, Sam's latest release 'Solo' is just that, an acoustic album featuring a mixture of new material alongside reworked songs from across his back catalogue, all recorded live at Southern Ground Studios in Nashville in September 2019.

Opening track 'What Does It Mean' comes in on a percussive, backbeat acoustic guitar piece before the arrival of Sam's vocal. And what a vocal it is, sitting somewhere between the soulful tones of Ben Harper and the gentle husk of Amos Lee.

'Southern Greek Tragedy' makes obvious the Townes Van Zandt references with its fingerpicked guitar and vocal phrasing, while 'Bluesday Night' is full of resigned beauty and is an early standout track.

Running in at nineteen songs with in-between chat and patter, this is a long record so I will confine myself to picking out a few personal favourites across the tracks.

Apparently written in England, 'Things Will Never Be The Seem' somehow sounds like it was penned in some downbeat Blackpool hotel, then there's the courtly pace and stately vocal of the lovely 'Never Again', the wry Hayes Carll vibe of 'Everything's Going To Be Different' and the simply beautiful deceleration of album closer 'I Love You'.

At nineteen songs, however accomplished, it is hard for one man and his guitar to keep the listener involved for this long and Sam's tempo tends to be pretty mid paced throughout, so a few dynamic shifts might have helped a little.

However, these are minor quibbles far outweighed by his truly great voice, sharp lyrics and keen ear for a melody. As an introduction to Sam Lewis,'Solo' does what it says on the tin and as someone who has now checked out his back catalogue, I can only encourage the listener to do the same.