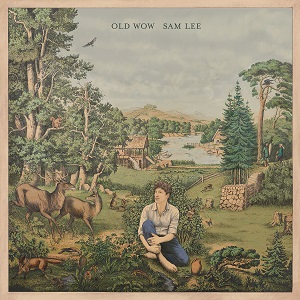 
It's a rather narrow view that describes Sam Lee as a folk singer. Song collecting, running folk events as The Nest Collective and activism with a specific emphasis on the natural environment take a large share of his focus. The pastoral image on the cover of his latest release, 'Old Wow', capturing perfectly this multi-faceted take on the world.

His career in studio recorded form started with the 2012 Mercury Music Prize nominated 'Ground of Its Own' record and, hence, this third record can be fairly termed as 'eagerly anticipated'. The ten tracks are gathered into three sections (heart, hearth and earth) whose linguistic closeness is no accident as it parallels the core message of this record emphasising the interdependence of human life and its natural surroundings. Helping in the studio with the production of this record is Bernard Butler of Suede which goes to emphasise just how ambitious Lee is in his arrangement of traditional song.

There are many familiar touchstones for fans of traditional folk music with, for example, the reworking of 'Seeds Of Love', 'Spencer The Rover' and 'Green Grow The Rushes'. The last of these being merged into the track 'Soul Cake' in a manner that is adopted throughout and may prove problematical to anyone who with a narrow view of 'folk music'. That's to say the traditional song is treated as part of an orchestral whole in atmospheric arrangements that find Lee's fine mellow vocal projected across the top.

The orchestral feel comes about with the use of violin, cello, double bass, percussion and piano as well as harmonising from Cosmo Sheldrake and spoken word poet Dizraeli. However, the biggest surprise is the rare guest appearance on vocal by Elizabeth Fraser of The Cocteau Twins which adorns 'The Moon Shines Bright'. Her contribution being to add a sweet and soulful rendition of 'Wild Mountain Thyme' to a track that shimmers like the rest of the album. The title of this new record from Sam Lee, 'Old Wow', resonates with the feelings of excitement when discovering something spectacular and reflects just what you'll experience from the music itself.