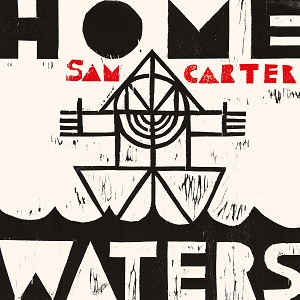 
A decade on from being declared Best Newcomer at the Radio 2 Folk Awards and four years since his How The City Sings album, Carter, now resettled in Sheffield, returns with his fourth solo (there was a False Lights release in 2018) collection, one that finds him in less strident mood, a calm river rather than turbulent sea.

Built around just voice and percussive acoustic guitar, 'The Forge' addresses the creative process, hammering experience and lives, others as well as his, into song ("Every mercy plea, every curse on the breeze, is a spark to the cinders") , leading into the fingerpicked rills and electric guitar solo complement of 'She Brings Me Home', a song about anchors on a restless tide.

'Fly The Flag' again highlights his subtle picking techniques, drawing on the image of a sinking ship for a collapsing relationship, though rather than that being of a romantic nature this is rooted in the rise of nationalism that accompanied Brexit (complete with a specific reference to the twelve gold stars on the European Flag), "as allies become enemies before our eyes" and the captain barks "shoot every stranger where they stand". It's also the first track to feature the string section of the Home Waters Quartet.

They're there too for the album's only cover, Matt Ridley on double bass for a reading of Sandy Denny's 'Bushes and Briars' arranged as to be unrecognisable from the original before returning to aquatic imagery with the spare, slow strum of the romantic 'Slow Waves' ("Slow waves will wash you out to sea / Slow waves will bring you back to me") which flow into the string quartet instrumental 'The Watersmeet', the waves gathering towards the end and crashing across the shore of 'Hold Back The Storm', penned by Ian Stephenson, this time with Ian Paterson on double bass, as a community comes together to tackle a flood , clearly another number invested with symbolic meaning.

The calm returns for 'Surprise View', a piercingly poignant percussive guitar number that harks to Carter's Yorkshire roots sung in the persona of a man making an annual pilgrimage to the Peak District to remember his late wife, a fellow walker, the title location where she asked him to drive her one last time after "the day she heard the news".

In direct contrast to the ruminative serenity there, anger rears its head again with 'Grenfell Rd', a song channelling the frustrations of those made homeless by the fire left for dead "sleeping four abreast in this hotel bed", the strings sweeping in in both dramatic flourish and gentle pizzicato notes as he sings how "more than ashes fell on Grenfell Road". Electric guitar reappears to herald in the final track, 'Ships In The Night', harmonium and drums adding their weight to the Richard Thompson-esque slow march beat on a fleeting friends' reunion song that reflects on time passing, of different paths taken, of remembering being "drunk on the bypass at quarter to three/Belting out 'Cinammon Girl'" as if "we had all the time in the world" and ending with the vow to "let's not leave it so long next time". Let's hope that a promise he keeps for album number five.