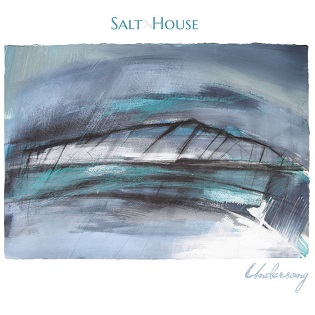 
Thomas Telford as well as being a renown canal engineer, also designed simple modular churches which were easily built in remote areas. Examples can be found all over Scotland in particular. One such on the Isle of Berneray in the Outer Hebrides has been restored into a performance space and the walls of which not too long ago, rang to the music of Salt House, a trio of Scottish folk players. Their album "Undersong" was recorded in the church to reflect their love of the islands.

"Old Shoes" Research shows that getting into the great outdoors can help reduce stress levels and significantly help with depression. This is echoed in this song. Blow away the cobwebs and run under the light of the moon, footfalls beat a tempo to increased enjoyment of the natural air. Even when darkness falls the slap of feet on the tarmac set a pulse for your heartbeat. The music fairly skips along as the vocal harmonies lift the mood. The fiddle melody rides over the fingered stringed instruments.

"Turn Ye To Me" Relates a legend where a sea monster steals a mother's baby while she gathers seaweed. It is replaced by a changeling. The mother addresses a large seabird as the cold wind ruffles the feathers on his breast as he sits on his warm nest lined with downy plumes. He may live on a rock, but her life surrounds a lonely grave. The pizzicato gives way to bowed strings as the woman sadly issues her pleas which are cast away by the cold wind. Jenny Sturgeon's vocals convey the emotion of the sad story.

"Lay Your Dark Low" Ewan MacPherson takes the vocal lead in his self penned song. There is a curious musical feature in the tune in that almost until the last verse, each line has an upward inflection at the end projecting uncertainty. It wasn't displeasing, I just felt it needed a resolve. Our hero is struggling home after a distant conflict, over the broken coast in poor weather and panic sets in when he can't remember how she sounded, what she liked, but he knows what she looked like. He needn't have worried she places her hands in his and seeks to banish the bad memories of the battle. Lauren MacColl's viola lends a mystical air to the track.

"The Sister's Revenge" This traditional song has been arranged by Ewan Macpherson. The story is of two sisters who arm themselves in search of the man who killed their father and lured away their mother. They find him and despatch him after which they have no more need of their weapons. I found the song almost hypnotically appealing in the simple way that two lines are intersected between alternate lines of each verse. The second of which explains their mission. I have not heard this song before, but this particular arrangement, despite the bloody end is beguiling and melodic.

"Charmer" The opening drone of the Shruti box introduces Jenny Sturgeon singing her own song inspired by Robert Burns' Now Westlin' Winds. I have noticed more folk bands are using the Shruti Box, it does seem to lend itself to (particularly) Scottish music. I suppose the parallel with the drones on the pipes is there. Originating in India, the first folk artist I saw playing it was Daria Kulesh who is Russian, so it has made its way to the western world to good effect. It certainly adds atmosphere to this emotive tale of a woman who will follow her man anywhere. Jenny's clear enunciation involves us in the story.

"Staring At The Stars" Time rushes over us, we are the people of the land, our screams are echoed back from the distant hills. This is another song written by Ewan and sung at least initially by Jenny, although Ewan joins in about half way through. Gentle finger picking on the guitar accompanies both voices. The fiddle and viola complete the accompaniment, in what is essentially a love song.

"The Road Not Taken" is a new setting by Lauren of Robert Frost's poem. A traveller comes to a fork in the road and after a moments indecision takes the road that looks less travelled, He wonders what the other road would have been like, but acknowledges that he will never know as he will not pass this way again. Initially all we hear except for the voice, are alternating notes a fourth apart. However as the song progresses the mandolin and percussion join in and it all ends up livelier without an increase in tempo. The pace of piece is set in time with a traveller trekking along.

"I sowed Some Seeds" is an illustration of the fact that the group are not afraid to change a traditional song. This of course is exactly how Folk Music has evolved over the years, centuries even. The song originates in the English west country with additional words and music by Ewan, it tells the sorry tale of pregnancy and desertion. The Inn keeper's daughter being the afflicted one. The stranger passes on and leaves his wrongdoing behind him and the unfortunate girl to bear his son. The music indeed has an English feel about it as opposed to the mainly Scottish vein that we have tapped hitherto.

"Slow Fields Of Home" is another Ewan MacPherson original. It is delivered almost in the style of a medieval minstrel telling the story with clarity. It is of someone who is determined to return to his lover's side, even though circumstances are against him. But his bodily and mental strength will ensure that he will regain his love.

"Undersong" a joint composition by all three members of the band, it combines as they say "both the current political situation and just getting outside despite the weather blowing a hoolie". It starts with cautious steps out of the door and encompasses broken ground, hardened stone and darkness ahead. The song also contains the thought that just because something is written down, it doesn't make either right or permanent. I think we can see where they are going there. A full band sound enhances the message and finishes off the tenth and final track of this album with some gusto.

The songs on this album, as we have seen, includes new settings of poetry, some new songs and reworking of others. Salt House have produced an interesting, thought provoking and ultimately enjoyable album. The production is superb and the lyrics perfectly clear in every track. "Undersong" is released on 2nd February 2018 and is available for pre-order from their website. They are touring in Scotland throughout the year.