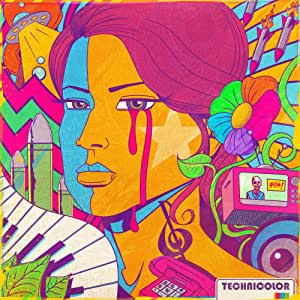 
Songwriting and music were already a passion of Lisset Diaz, even before she graduated top of her class in biochemistry at the University of Havana. However, before meeting record producer and respected Cuban guitarist Miguel Coma, she might not have anticipated becoming lead vocalist in a rock band that would go on to appear regularly on state television, and tour the country with full road crew and stage. Following the release of Sweet Lizzy Project's debut album, 'Heaven', they were 'discovered' by Raul Malo, lead singer and founder of The Mavericks. He saw their potential, helped the band get US visas, and moved them to Nashville as his passion project in late 2017.

At the prestigious Blackbird Studio they worked with engineer Niko Bolas and, in the process, kept many of the original sound recordings from Coma's bedroom studio in Havana. Teaming up with the rest of the band - Wilfredo Gatell (keyboards), Alejandro Gonzalez (bass) and Ángel Luis Millet (drums), the ten finished tracks that emerged eventually became 'Technicolor'.

Those hoping for 'Technicolor' to be a rich seam of traditional Cuban music and rhythm may be disappointed. Only two tracks are sung in Spanish, although 'Turn Up The Radio' is a lively English version of Enrique Iglesias' 2017 hit 'Súbeme la Radio'. Cuban roots shaped both the band and their Miami-born mentor Malo, but Sweet Lizzy Project's star ascended in their homeland by delivering what young Cuban audiences most wanted to hear - American and European music. Live sets would typically include classics such as 'I Heard It Through The Grapevine', as well as the Rolling Stones' 'Wild Horses', 'You Can't Always Get What You Want' and Led Zeppelin's 'Ramble On'.

The title track on 'Technicolor' is a powerful six minute journey that begins with Lisset's voice extending over layered backing until Comas' obviously Pink Floyd inspired guitar solo kicks in at around the half way mark. Similarly, 'Ain't Nobody To Call' is a retro-rocker with a hook line that reminds of The Knack's 'My Sharona', with distorted vocals that dig deep but somehow end up sounding rather vacuous. She is much more comfortable when tackling strong ballads like 'These Words', where she sounds like Paramore's Hayley Williams performing to a Guns'N'Roses backing track. Predictably perhaps, the collaboration with The Mavericks, 'The Flower Is In The Seed', sprouts mostly country flavours and preserves little of the true taste of Havana.

Ultimately it is the two Spanish language songs that push their way to the top of the pile. 'Tu Libertad' is a garnering of the twin forces of freedom and independence, and 'Vuelta Atras' is a real foot-tapper that grows into a persistent ear-worm after just a couple of listens. 'Travel To The Moon' is a brave attempt to launch away from the band's comfort zone and manoeuvre into a fresh orbit, and managing to distance themselves from the 'borrowed' sound that was so popular during their time in Cuba. For any musicians leaving the problems and hardships of their cultural homeland on a promise of greener grass, the journey sometimes comes with a price-tag that you don't expect, or necessarily want to pay. 'Technicolor' suggests that Sweet Lizzy Project may still be ambivalent about who they really want to be.