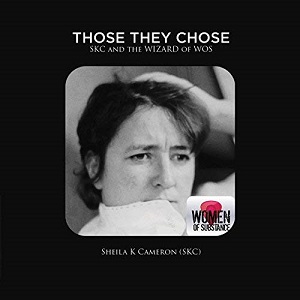 
Scottish writer and artist Sheila K Cameron has released an album showcasing her distinctive take on traditional folk and blues.

All of these songs, originally recorded in diverse places, from Glasgow to British Columbia, were featured on the Woman of Substance pod cast over the last few years, and have been remastered for this release. The beautifully curated collection has the feel of a compilation of field recordings and demos from a legendary artist.

The songs are short and simple, rarely straying beyond three chords or four minutes, the melodies evocative and familiar, but never cliched. The lyrics are honest and powerful, and she sings with mature and reflective melancholy. The delivery is downbeat, imbued with the sadness of ages.

Mostly originals, the album draws you in with its subtle delivery and arrangements, a talented cast of backing musicians is used sparingly, but to great effect.

The record opens with 'As You Wrapped the Strings', a gentle piano motive floats over a synth pad, and Cameron's weary vocal line, artfully behind the beat, sounds for all the world like early Velvet Underground.

Blues harp and slide guitar lead us into the 12 bar 'I Looked Alright this Morning'. Full of bitter irony, a song of love and regret, SKC has a sharp ear for a lyric:

If I believed I really loved you,
there would be no more need to cry.

'Stay with it Baby' opens with spoken word combining with vibes and harmonica, before a lolloping twelve bar groove sets in. 'With You in my Life', has a gentle trad jazz feel, tuba taking the bass line, muted trumpet, clarinet, trombone making like the long dead ghosts of the Hot Five. The closest thing on the album to a good time number, like Leonard Cohen sings Dixieland in a post-apocalyptic dystopia.

An acoustic cover of Roberta Flack's 'The First Time I Ever (Saw Your Face)' is brilliantly deconstructed, it's traditional modal structure exposed, and sung as a slow air; recorded as if in a crofter's cottage in the dead of winter.

'Drink to Me Only' is a beautiful acoustic vignette, mournful and pleading and achingly sad, and then we're back to to blues, with Hammond B3 and harmonica leading into 'You don't Know my Mind.'

The album closes with 'Where the Last Tide Runs', with Cameron's distinct breathy delivery; voice moulding traditional chord shapes, piano picking out counter melody, over a wash of strings.

Brilliantly simple in its sophistication; this is not a technically perfect album. The singers voice is limited in rage, the musicianship often apparently pedestrian. The power is in the integrity of the artist, and the belief of the listener.

Worth a listen, preferably late at night, in a reflective mood, as you pick on and replay favourite tracks time and again.

My Love Is Velvet