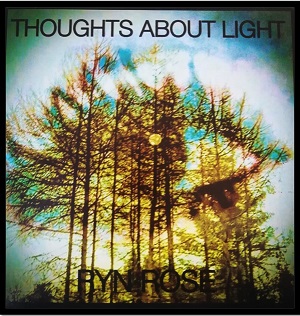 
Ryn is a singer and songwriter based from Devon. Circumstances that limit her possibilities for live shows have meant that she is not as widely known as she should be. This album is the latest in a series of releases over the last few years, each one saturated with beauty and some of the most original and sophisticated songwriting you're ever likely to hear. "Thoughts About Light" raises the bar even on those earlier releases. Ryn's themes are diverse, but focus on emotional and psychological reflections of relationships -with others... and with herself.

The album opens with a set of three sublime songs that each showcase Ryn's beautiful guitar playing balanced with the range and intensity of her vocals. "Come The Sundown" is a strong opener, as Ryn is joined on vocals by Will Watt for a refrain that really stays in your head all day. "Belong" continues the intensity of emotion, but has a lighter and more uptempo feel. Ryn's voice transitions effortlessly from ethereal and fragile to a roar of affirmation. The third track, "Retrograde" is another shimmering beauty before we get a change of pace in the next track, "Thank You So" - a catchy, toe-tapping, poppy song that nonetheless includes some well-learned life lessons from the author!

"Edge" is driven by a resonant bass line underlying Ryn's wistful vocal and crystal clear guitar. Perhaps this is as good a time as any to talk a little about the instrumentation and production of this album. It was recorded and produced at Polyphonic Recording Studio in Stroud, by Lukas Drinkwater who also plays almost all the instruments other than Ryn's acoustic guitar. Ryn's guitar is the prominent instrument throughout the album but Lukas's skill is to surround it and support it with such subtle and atmospheric soundscapes. Apart from the gorgeous double-bass playing - which would be expected from Lukas Drinkwater - there are so many little touches of other instruments and sounds that are mixed skillfully to bolster and focus on the song itself, and not to draw attention to themselves.

A new tone is brought in with "Calibre" which has some powerful, scathing lyrics and a sparse, pared back production. "Yours By Right" returns to the more gentle reflective feel of the opening tracks of the album, and is a great showcase for the range of Ryn's singing. She starts with a breathy, almost whisper, then moves into a more casual conversational tone, before gradually becoming a more solid and decisive declaration: "You can't prove me wrong!"

"Sleeves" starts with pin-sharp landscape description that quickly is mirrored in an internal, emotional and spiritual observation. "A climate held by skin - this weather is within..." Ryn's lyric writing is always really exceptional. She creates unexpected and shining images, avoiding cliché and the obvious without the lines ever becoming strained - they all flow perfectly naturally.

To close the album we get "The Original" a beautiful, declarative song: "The only thing that matters here is love / or tremors from a lack thereof."

This is a stunning album from one of the very best around. It is full of insight into the human condition, beauty and subtlety, and leaves the listener feeling profoundly moved and yet with a powerful sense of optimism and hope.