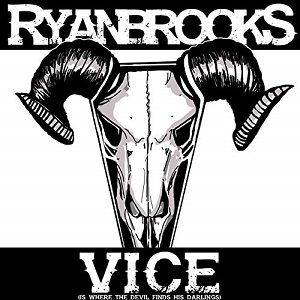 
At the age of 24 Nottingham's Ryan Brooks presents VICE his debut album. Self produced at home, everything is played by Ryan, apart from Ferocious Dog's Dan Booth's violin but this is an immediate tightly wound offering not a layered Mike Oldfield opus. "My Own Sweet Way" is wonderful Folk Country, Celtic twang and swagger. "She" is soulful pop, so confident and polished it sounds like a cover. The chorus hook is infectious and the whole thing sounds like a hit with a fine vocal by Ryan. "Arlene" and "City Lights" and have a touch of louche feel good singalong Jake Bugg with a sweet county fiddle and rock n roll guitar to add sparkle. "Get Up" is a world weary drifter song, delivered with a Pop sheen and a infectious drum beat, part Roger Miller part Ed Sheeran. "Red Light Alley" has another half empty bottle lyric that becomes intoxicating rather than intoxicated because of the percussive beat and Brooks' sweet snarl vocals. Wonderful expressive guitar solo too.

"Vice (Is Where The Devil Finds His Darlings) " gives a gleeful pop sheen to a classic blues lyric in, wonderfully upbeat marriage. "Find A Way" has the jangling guitar of 90s alt folk like The Indigo Girls with a little Rock vim and an audience friendly chorus, crowds will enjoy shouting this ear worm back at Brooks. "Come Over" has the sneer of dirty Rock n Roll and the sparkle of a crooner ballad, slurred compelling attitude and fragility in the same song. Pop, gritty singer songwriter material with weary country all delivered with confidence, attitude and a deft touch unusual on a debut. A surprising and uplifting listen, you will be humming these songs soon enough.