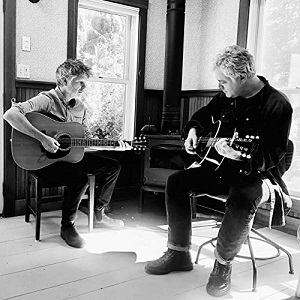 
This is actually quite an unusual album for a singer-songwriter to make - for instead of performing his own material Ry gives us his own informed takes on songs written by his dad, the late-70s country/honkytonk singer George Cavanaugh (leader of the Bobby Pedd Band), who died of heart failure when Ry himself was just 22. Ry having just reached the same age his dad was when he died (in the early 80s, having barely turned 40), he felt it was "time for this" tribute in memory.

Even so, despite the clear origin of the songs, Time For This - Ry's first solo album in 20 years - maintains the focus on Ry's own voice. Which we've not heard much of, at least directly, during his long tenure with the band Session Americana, the "floating outfit" he founded over 15 years ago. It's probably symptomatic, then, that this set of songs from the pen of Ry's dad are highly evocative deep troubadour Americana, of the twin poles of childhood reminiscence and the whisky bottle. Ry keeps the settings commendably simple, minimalist even, concentrating on the import of the lyrics. His own guitar and voice is supplemented (and that beautifully sparingly) by the guitar of Duke Levine and there's some sympathetic, delicate harmony vocals from Ry's wife Jennifer Kimball on three cuts including the waltz-time honky-tonker Too Tired For Drinking. The effect is both stark and warmly intimate, as Ry brings these songs direct to the listener's ear without fuss or artifice or unnecessary clothing. Opening song Carillon really sums up that sober yearning for the train to carry us back home; thereafter we're steered through a sequence of quintessential Americana concepts, each one memorable and poignant. Standouts for me are the early-Dylanesque title song, the forlorn reflection Trinity (with its strong Band vibe), and the tender Gypsy Dad (which closes the album).

Ry's decision to recover and document his father's songs in his own contemporary reworkings was one which turns out to be fully justified in these heartfelt and simply judged reworkings. On this evidence, I'd certainly deem George's songwriting worthy of further investigation.